Volcanic mountains are a special class of mountains. A volcano is a vent or opening through which magma, ash, gases, and water vapour are ejected out. Volcanic mountains consist of – Magma chamber, Vent, Lava, Crater, and pyroclastic flow.

Volcanic soil or the soil around a volcanic mountain is very fertile. This is because all the required nutrients come out with the volcanic eruption. Volcanic mountain or volcano may be active, dormant or extinct, based on the level of their activity. 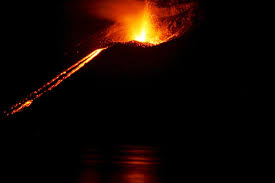 Characteristics of a volcano or volcanic mountains

On the basis of activity:

On the basis of structure:

Question: Explain how a volcano can give rise to Tsunami?

Answer: Tsunami generally occurs when an oceanic volcano erupts replacing a huge amount of water. As per an estimation, there are around 700 volcanoes under the sea. Most of these volcanoes are present in Pacific ocean belt of fire.