Sometimes when you’re nervous, you tend to bite your nails and at times you also end up biting your finger. Yet have you noticed how just in a span of days the nail regrows and so does the skin of the finger. How does that happen? Well, it happens because of a process of cell division known as ‘Meiosis’. But what is it? And how is different from mitosis? Let us study more about it.

It is a specialized form of cell division process in which a single cell divided twice to form four daughter cells that possess exactly half the number of chromosomes of the parent cell. Therefore, all the four cells are haploid and will contain half the original amount of the genetic information. These cells are call sex cells: sperms in male whereas eggs in females.

Mitosis & Meiosis are the two major cell division processes. However, meiosis is solely used for one purpose in a human body. It is used for the production of gametes cells, also known as the sex cells. Mitosis and meiosis are quite similar in processes with very few differences. One of the differences is that mitosis has one division whereas there are two divisions in meiosis.

This is the reason meiosis is also known as a reduction division process. Thus, in meiosis germ cells are divided by two fissions of the nucleus which result in four gametes or sex cells. Each cell possesses half the number of chromosomes of the parent cell. The process of meiosis occurs in almost all sexually reproducing single-celled and multicellular eukaryotic organisms like animal, plants, and fungi.

Meiosis starts with duplication of chromosomes. Then the parent cell undergoes two rounds of nuclear divisions (meiosis I and meiosis II). Thus in an overall meiosis process, four daughter cells are produced from the parent cell. However, before entering the stages of meiosis the parent cell go through a phase called interphase. Similar to mitosis, the cells growth begins in the G1 phase of interphase, the chromosomes are duplicated in the S phase and then in G2 phase the parent cells prepares for cell division. 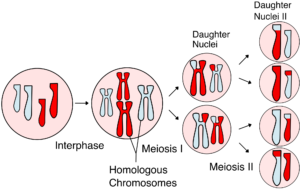 In this stage, the sister chromatids or the chromosomes of the maternal set combines together with their homologs of the paternal chromosomes set. The duplicated chromosomes condense and in combination, they look like two X’s present next to each other.

Every chromosome is made up of two sister chromatids that contain similar genetic information. The chromosomes pair up in a pattern that copies of particular chromosomes are paired together. The maternal and paternal chromatids exchange their parts of DNA and recombine to develop genetic variations.

The process of exchange of genetic information is called recombination or crossing over. However, in the case of a male in humans the sex chromosomes X and Y are not homologs but they can pair together and exchange DNA. Recombination happens in a small part of two chromosomes where homology is present.

The nuclear membrane of the cell breaks down releasing the chromosomes by the end of prophase I. The meiotic spindle that constitutes microtubules and other proteins that is stretched across the cell in between the centrioles.

The meiotic spindle attaches to the combined sister chromatids (one chromosome of each pair). At the end of metaphase I, the fused sister chromatids are latched to the centromere and line up in the center of the cell. The homologs still represent X sitting next to each other.

The chromosome pairs are gradually pulled apart when the meiotic spindle fibres start to contract. As a result, one chromosome is pulled to one end of the cell and the other chromosome to the opposite end. Thus each X shape structure moves away from each other towards the opposite pole.

Telophase I and Cytokinesis

In this stage, the chromosomes completely move apart and are present in the opposite poles of the cell. Each pole of the cell contains a full set of chromosomes arrange together. A membrane develops around each chromosome pair. At this point, the single cell splits in the middle to create two separate daughter cells by a process called cytokinesis.

Metaphase II- The pair of sister chromatids arrange themselves in line along the equator of the cell. The centrioles are now present at the opposite ends in each of the daughter cells. The developed meiotic spindle fibres at each end attach onto the centromere present in the sister chromatids of the cell.

The meiotic spindle fibres start contracting and the sister chromatids are pulled to the opposite ends. At this point, the chromatids are separated and they form individual chromosomes.

The chromosomes finally move to the opposite ends of the cell. At each end or pole, an entire set of chromosomes are arranged together. Again the nucleus membrane develops around each pair of chromosomes and two new cell nuclei are formed.  This marks the last phase of meiosis but the cell division process remains incomplete without the cytokinesis process. So the cell undergoes cytokinesis and after the process, four granddaughter cells are formed.

Each newly formed cell contains half a set of chromosomes or haploid chromosomes. Each chromosome is distinct and unique. It is composed of a mix of genetic material from the paternal as well as paternal chromosomes of the original cell.

For example in humans, these special cells are known as germ cells. The germ cells undergo meiosis and create sperms (male) or eggs (female). Germ cells constitute a total of 46 chromosomes (23 maternal and 23 paternal). Finally, after meiosis, the reproductive cells or the gametes formed contain 23 genetically distinct and unique chromosomes each.

Q. What does the word homologous means?

Ans: The correct answer is 3.