Do you know the cause of cancer is related to cell cycle? The cancer cells cannot be regulated by the cell cycle and therefore constantly divides even in the absence of the required growth factors. This is the reason why it is difficult to kill cancer cells. Let us learn more about the cell cycle.

Scientists and microscopists have known cell cycle and cell division for over hundred years. However, it was the pioneering and revolutionary work of Alma Howard and Stephen Pelc in the 1950s that revealed DNA replication took place at a particular phase of the cell cycle. They demonstrated that cell cycle is distinct and separate from the mitosis process.

Cell cycle (cell division cycle) is an ordered sequence of events occurring in a cell. Cell cycle results in cell growth and DNA replication thereby forming two daughter cells. It is an essential process for the formation of a mature organism from single-celled fertilized eggs. The process of cell cycle promotes renewal and regeneration of hair, blood cells, skin, and certain internal organs. The formation of daughter cells by cell division indicates the start of a new interphase cycle.

Different Stages of a Cell Cycle 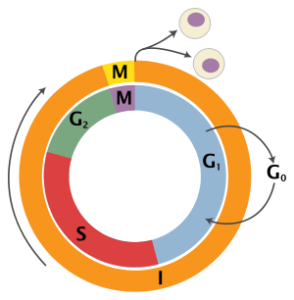 A cell splits after completing a sequence of events. For example, a cell grows, replicate its DNA (genetic material), and then finally divides into two daughter cells. The cell cycle is termed a cycle because the events repeat itself. After completing one complete round the newly formed daughter cells begin the same process all over again. The two key phases of a cell cycle are interphase and M phase or the mitotic phase.

Every phase will be successfully activated on proper progression and completion of the previous phases. However, if a cell is temporarily stopped progressing or somehow stopped dividing then the cell enter into another state termed as G0 phase, also called a “state of quiescence.” Let’s discuss the steps or phases in details.

In this phase, the cell grows and produces a copy of the genetic material (DNA). Interphase can be further subdivided into three distinct phases: G1 phase, S phase (synthesis), G2 phase. The cell cycle begins after the division of mother cell into two new daughter cells. If the newly formed cell wants to move on then it must divide itself.

However, there are certain initial steps that occur before the actual division. In these phases, the new daughter cell prepares itself for the division. The interphase usually seems like a resting phase between the cell divisions but on contrary, it is a phase with a number of diverse activities. The duration of interphase may vary from 12 to 24 hours in the mammalian tissues.

Interphase can be summarized as the phase between two M (mitotic) phase.

Alternatively, there are other types of cells that divide at a slow pace and sometimes completely stop dividing and enter into another phase called as G0 phase or resting phase. The cell will continue its usual function. Such as neuron after the end stage does not divide but continue to conduct signals.

Duration of the Cell Cycle

The cell cycle duration will vary in different types of cells. The G1 phase will continue for approximately 11 hours, S phase will continue for 8 hours, G2 phase for nearly 4 hours and the M phase for nearly one hour in a rapidly dividing human cell with cell cycle duration of 24 hours. Some cells may divide faster than human cells whereas some cells may take more time to complete an entire cell cycle. For example “budding yeast” will complete the entire cell cycle (4 stages of the cell cycle) in about 90 minutes.

Q: Which is the longest phase of the cell cycle?

Sol: The correct answer is option “B”. G1 phase is usually the longest phase of cell cycle. G1 phase is the first gap phase where the cell is preparing for the other stages of cell cycle. Moreover, G1 phase follows the mitosis cell division. It is the time for the newly formed cells to grow before the DNA replication. So, the G1 phase is the longest. G1 phase can vary in the different type of cells. It can last for minutes such as prokaryotic cells, hours such as yeast or sometimes for years such as liver cells.

Share with friends
Previous
Locomotion and Movement
Next
Stages of Evolution