Trees are the lifeline to the living species that exist on this planet. They are the ultimate source of oxygen which is required to survive. Have you ever visited a forest? Have you ever feel blessed to see so many trees around? Imagine all these trees getting cut at a slow pace and leading to barren lands. Imagine the effects of deforestation  Let us know more!

Presently, forests occupy 31% of the total land area on Earth. Also, they produce important oxygen and offer shelter to humans and wildlife. It is important to know that, many endangered and threatened animal species live in forests. In addition, close to 1.6 billion people depend on the benefits forests provide; it includes food, fresh water, traditional medicine, clothing etc. 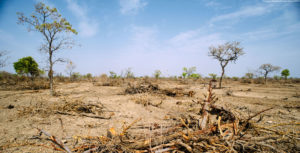 Effects of deforestation are quite saddening which has motivated governments to frame out plans to resist the cutting of trees in large numbers. Deforestation is present in different forms, such as clear-cutting for agriculture, fires, development, and ranching, unjustifiable logging for timber and climate change degradation. According to active statistics, on an annual basis, 18.7 million acres of forests are lost, which is very much disturbing.

The presence of trees helps in the mitigation of carbon dioxide as well as other greenhouse gas releases. However, it should be kept in mind that, they become carbon sources whenever they are cut or burnt. Tropical forests manage close to 210 gigatons of carbon.

Moreover, deforestation highlights around 15% greenhouse gas emissions. As a result, these greenhouse gas emissions lead to rising temperatures, variations in weather patterns and rising frequency of thrilling weather events. One must stay aware of the fact that, changes in climate do affect forest-dwelling creatures. This is due to alterations in their habitats and lesser availability of water and food.

The importance of trees for controlling local water cycle is not known by many. Trees help in keeping a balance between land water and atmospheric water. However, deforestation works to distort the balance and cause changes in river flow and precipitation.

One of the most disturbing effects of deforestation is soil erosion. Trees do anchor fertile soil, but when erosion occurs it sweeps the land into the water body. It has been analyzed that, agricultural plants which usually replace the trees aren’t effective in holding the soil.

Several plants such as cotton, coffee, palm oil, wheat, and soybean can actually intensify soil erosion. As per scientists, since 1960, almost a third of the globe’s arable land is lost due to soil erosion and other versions of degradation. Hence, the presence of trees is important for letting fertile lands stay intact.

Q. How to curb Deforestation?

Ans: There are several steps which we can follow as an individual to stop deforestation on a large scale.