There is a famous saying that goes like this – “We never know the importance of water until the well is dry!” This is so profoundly true in today’s time period, where we have abused every other source of water in ways unimaginable. The resultant effect is the global water shortage along with the harmful effects of water pollution. Let us study more about this.

Water pollution is an undesirable change in the water caused due to certain pollutants, which affects the activities of living organisms including humans. We know that water is a natural source that is too precious. We have to safeguard this precious source, whatever is remaining of it.

When humans dump everything and anything into the water bodies, they are damaging an important lifeline of all living organisms. They must take measures to stop water pollution. In fact, the government of India has also passed an act under the Prevention and Control of Pollution Act, 1974 to help safeguard the water resources. When you look into the aquatic food chain, these toxic materials that are ingested by the organisms cannot be metabolized or excreted. And, therefore they are passed on to the other trophic levels. Gradually as you go higher up the trophic levels, the concentration of these toxicants increases; thereby causing immense damage to the organisms. The concentration of DDT in fish-eating birds disturbs the calcium metabolism, thereby leading to thinner egg shells and a gradual decline in the bird population. 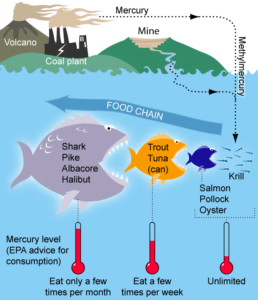 The natural ageing of a water body like a lake due to nutrient enrichment is called eutrophication. Water in a young lake is cold and devoid of many nutrients. As other water bodies drain into it, they bring along nutrients and minerals like phosphorus, nitrogen etc. This increases in the population of organisms in the aquatic body.

With the deposition of the organic remains at the bottom of the lake, the water slowly becomes warmer. Floating plants also develop. This process slowly increases the conversion into the land. There are many factors like climate, size of the lake etc. that affect the natural ageing of the water body. But water pollutants from homes and industrial effluents increase the rate at which this ageing occurs. This is accelerated or cultural eutrophication.

It is also called as biochemical oxygen demand. BDO is the measure of oxygen that is used by the microorganisms to oxidize (decompose) the organic matter in water. It is very important because it is a parameter that shows the water quality. Any discharged wastewater or pollutants have an undesirable effect which increases the plant growth and decay in the aquatic body unnaturally.

The BOD is an index of the effects of the discharged wastewater. So, a higher BOD level means that there is a greater amount of organic matter available for the oxygen-consuming bacteria. This results in lesser dissolved oxygen for other living organisms, which may eventually lead to the decline of fish and other living aquatic creatures.

Excessive algal bloom is harmful. Some algae are toxic to human beings and living organisms. Large amounts of nutrients in the water are the main cause of harmful planktonic growth. They ultimately cause the deterioration of water quality along with the decline in fish population. 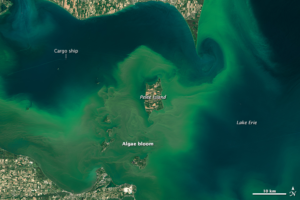 Q: Give an example of a problematic aquatic weed. Write few lines.

Ans. Water Hyacinth (Eichhornia crassipes) is a classic example of a problematic aquatic weed. We also call it the Terror of Bengal. It causes an imbalance in the water ecosystem.