A monohybrid cross is a process of mating between two individuals with dominant genotypes, homozygous genotypes or alleles with hereditary characteristics. The monohybrid cross results into the phenotypes which have the opposite genetic traits from each other. Table of content
1 Browse more Topics Under Human Body
2 Monohybrid Cross Definition
2.1 Three Steps of the Monohybrid Cross
2.2 Step One – To Find out the Genotype of a Person
2.3 Step Two: Setting up the Punnett Square
2.4 Step Three: To Determine the Off-spring Ratio
2.5 Solved Question for you

Furthermore in monohybrid cross ‘Mono’ means ‘one’ and ‘ Hybrid’ means ‘the offspring of the two organisms of different species’. In Conclusion, the Punnett Square of 2×2 is sufficient to determine the possibilities of a monohybrid cross.

In order to predict the possible outcomes, Reginald Punnett, a British geneticist introduced Punnett Square. Punnett Square is the simplest type of the Monohybrid cross.

Three Steps of the Monohybrid Cross 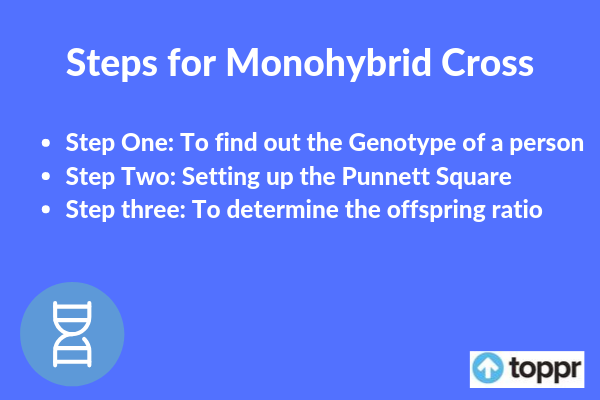 Step One – To Find out the Genotype of a Person

The first step monohybrid cross is to determine the Genotype. Though this is not an important step because an organism always has a dominant and a recessive trait. Moreover, the determination of these traits form the alleles of the genotype.

Therefore the combination of the dominant and the recessive of both males and females will be ‘Yy’ for Male and ‘Xx’ for females. In this step, the alleles of the set of genes combine to form a genotype. The genotype is the set of DNA that determines the phenotype.

The Punnett Square has four sections i.e. it is a square of 2×2 grid. In this one male genotype of both recessive and dominant allele in the first section.

Likewise in the fourth section the female genotype. The other two sections contain a dominant and recessive allele of both the male and female. For instance, the first section contains the ‘Yy’ genotype, the second contains ‘XY’. In the same manner, the third contains ‘xy’ and the fourth ‘Xx’. This covers up all the possibilities of phenotype.

The last step of the monohybrid cross is to determine the off-spring ratio. In the Punnett square, the male is dominant over the female. Therefore the phenotype of the offspring will have male traits considerably. As a result, the ratio of the male phenotype to the female is 4:1.

For example, if a male has dark skin then there will be much chance that the offspring will also have the same. In four children there will be only one child having a fair skin color.

However, in practical life, this is not true in general. You can see 7500 people among 1000 having a fair skin color. This shows that this ratio does not hold authenticity in real life.

But still, we can determine the possibilities of offspring’s phenotype. According to the ratio the dominant trait should always hold a majority. But in real life it is about probability as the ten times of flipping the coin does not necessarily mean that it will be five times head and tail.

Answer. Option B is correct. To find out the Genotype of a person is the first step of the Monohybrid Cross. However, this step is not necessary as an organism already has a dominant and a recessive allele.