Generally, the disorders of the immune can be classified into three categories. They are Immunodeficiencies, Autoimmunity, and Hypersensitivity. When one or more part of the immune system in the body does not work, then it leads to immuno-deficiencies. These can be caused in many ways.

The classic example of an Immunodeficiency disease is AIDS, which you will read about in detail, in the next paragraph. Immunodeficiencies can also be inherited such as the chronic granulomatous disease.

Autoimmune diseases are disorders of the immune system, in which the body attacks the healthy and normal tissues. The cause in these cases is not known. In most cases, it is believed to be a combination of genes and environmental triggers. Examples are Lupus, Rheumatoid arthritis, Type 1 Diabetes etc.

In Hypersensitivity, the immune system of the body overreacts. This can possibly damage the healthy tissue of the body. An example of hypersensitivity is an anaphylactic shock. Here the body responds very strongly to allergens and can be life-threatening. 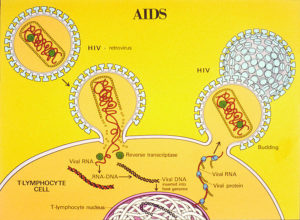 When the T helper cells are absent, then the immune system cannot defend the body, even against organisms that are usually harmless. And it is during this period of gradual decline of the T helper cells, the infected person has several bouts of fever, weight loss, and diarrhoea. The body will not be able to defend itself due to the infections that are caused by bacteria, virus, parasites and even fungi. This slowly leads to life-threatening infections and diseases, in people who have the AIDS syndrome.

The HIV infection can be passed from mother to child during the birth process or even during breastfeeding. Unprotected Sexual intercourse with infected partners, sharing contaminated needles, are also the other ways through which this infection spreads. AIDS mainly spreads through body fluids and not by mere physical contact or touch.

The diagnostic test that is used to detect AIDS is the ELISA test (enzyme-linked immunosorbent assay). The treatment for this type of disorder of the immune system is usually the anti-retroviral drugs, which are only partially effective. These drugs can only prolong the life of the patient but cannot prevent the inevitable death.

This disease is something for which there is no cure at present. And hence prevention is always the best option. There are many organizations in India that work painstakingly to educate the people about AIDS and ways to control the spread of this disease. Some of these noteworthy organizations are a few NGOs and the NACO – National AIDS Control Organization. 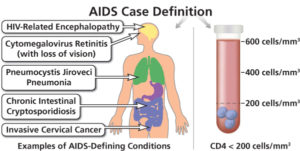 Q: Write the causative factor of AIDS and what are the modes in which this infection is spread? What is the diagnostic test used for detection?

Ans. AIDS is caused by the Human Immunodeficiency Virus. The test that is used to diagnose AIDS is the ELISA test. The various modes of transmission are: