When you read about antigen and antibody, you will begin to understand that these have something to do with the immunity in the body. In the field of microbiology and immunology, the antigen-antibody complex has a major role. Let us take a detailed look.

Table of content
1 Suggested Videos
2 What is an Antigen?
2.1 Browse more Topics under Human Health And Diseases
3 What is an Antibody?
3.1 Structure of Antibody
3.2 Antigens and Antibodies – Their role in Vaccinations
4 Solved Questions For You

What is an Antigen?

Antigens are substances that stimulate the immune system to produce antibodies. Each antigen has a distinct surface feature or epitope. Thus there is a resultant effect of a specific response. Antigens could be anything like a pathogen or bacteria or fungi or even virus. They cause diseases or allergic reactions.

Antigens are generally proteins. But they can be lipids, carbohydrates or nucleic acids. Antigens can be of three types – Exogenous, endogenous and autoantigens. Antigens can also be foreign bodies that stimulate the immune system of the body. Even pollen and spores can be antigens.

To summarise in a nutshell, antigens are the harmful germs or pathogens or other foreign substances that pose a threat and disrupt the normal functioning of the body. And in order to stop this disruption, the body produces an antibody to protect itself, thereby destroying the antigens. What is an Antibody?

An antibody is an immunoglobulin. It is a Y shaped molecule which is basically a protein that is produced by the B cells of the immune system. Antibodies are produced in response to the exposure to antigens.

An antibody has a paratope that can recognize the epitope that is present on the surface of the antigen. Both the antigen and antibody act like a lock and key mechanism. With the help of this binding, the antigens are eliminated from the body. This occurs either through direct neutralization or with the help of tagging of other arms of the immune system.

There are five kinds of antibodies, such as Immunoglobulins M, G, E, D and A. An antibody is a serum protein that is generally found in blood. 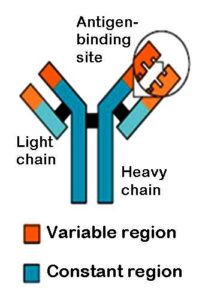 Both the heavy chains and light chains are held together by disulfide bonds. Both these chains also have two regions called the distinct region and the variable region. It is the variable region of the antibody that sees the action happening. Here the lock and key mechanism occur along with the antigen that has adhered to the antibody.

Antigens and Antibodies – Their role in Vaccinations

Antigens and antibodies have a significant role to play in vaccines. They are present in vaccines so that they can stimulate the B lymphocytes present in the immune system. Once these lymphocytes are stimulated, they respond and produce plasma cells which secrete the specific antibodies for that specific disease.

There are some B cells that become memory cells which help in recognizing any future exposure to the disease. So, ultimately, this helps in the faster production of antibodies. These antibodies work efficiently and bind themselves to the antigens and thereby eliminate the disease. 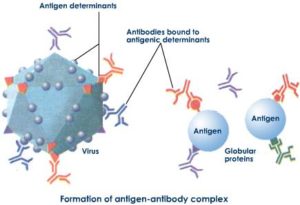 Q: What are the different types of antibodies present? Write a few lines.

Ans. The different types of antibodies that are present are as follows: