The world’s biggest health challenge now is the dreaded disease, cancer. It is the number one killer disease in underdeveloped countries. Did you know that there are more than hundred types of cancers and any part of the body can get affected? It is also a fact that some of the cancers can be preventable. Let us learn more.

What exactly is Cancer?

The human body is made up many millions of cells that show cell growth and cell differentiation. This process is highly regulated and controlled, which ensures that these processes occur in a normal fashion.

There is no uncontrolled growth of the body cells by virtue of the contact inhibition property displayed by the cells of the body. When the body cells lose this property and show an abnormal growth with a breakdown of the regulatory mechanism in the cells, then it leads to a mass of continuously growing cells. This is nothing but cancer. Cancer cells divide continuously and make this mass of cells called tumours. Tumours can be either benign or malignant. When the tumours do not spread to other parts of the body and are confined to their original location, then they are called benign tumours. They generally do not cause damage to the body.

But the other types of tumours called the malignant tumours are dangerous. These tumours have cells that keep proliferating to other locations. These tumour cells are also called as neoplastic cells. The characteristic feature of these tumour cells is that they divide rapidly and damage the surrounding tissue, by invading into it.

Due to this active division of this mass of cells, the other normal cells do not get the required nutrients and thus starve. These tumour cells are capable of reaching distant sites in the body through blood. Not only that they have the ability to start a new tumour at this site. This property of the malignant tumour cells is called metastasis. 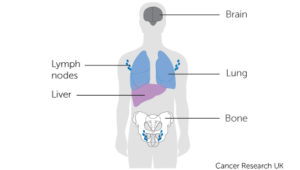 The environmental factors rank high for the cause of cancer disease. The role of genetics is limited to a mere 5 to 10 percent. Physical, chemical or biological agents called as the carcinogens are responsible for the transforming normal body cells into cancerous cells. U v rays, X rays, tobacco smoke etc. are some of the carcinogens that damage the DNA of the body cells and cause the neoplastic transformation. There are even viruses that can cause cancer.

Detecting cancer in the early stages of the disease heightens the curability factor. A biopsy is done to the cancerous tissue to detect whether a tumour is malignant or benign. MRI, Radiography, CT scan etc. are some of the techniques used to detect cancer of the internal organs.

Healthy lifestyle choices are by far the greatest measures that can be made to decrease the risk of getting cancer. Cancer need not always spell death. There are many cancer survivors who have braved this disease and are now leading a happy life. Early detection, proper care, and treatment are essential to fight the battle against cancer.

Radiation therapy, chemotherapy, surgery are some of the ways it is treated. The cancerous tumour cells are killed in such a way that the normal surrounding cells do not get affected. Medications and drugs are also prescribed to patients, which have some side effects like hair loss, anaemia, etc.

Q: Cancer cells are more easily damaged by radiation than normal cells because they

Answer: The correct option is “A”. Cancer cells rapidly undergo mitosis. It usually spreads through the blood or the lymph system. It is mainly caused due to the mutagens which cause a sudden heritable change in the DNA content which leads to fatal abnormalities. They can be easily damaged by the radiation.