Introduction to Genotypes and Phenotypes

We all know that every organism is a derivative or a by-product of the environment and the genetic structure it possesses. Also, it is where genotypes and phenotypes come into the picture. These two terms might sound similar to you, but they hugely contradict each other. The genotype definition is a set of genes in DNA that determines the unique traits possessed by a living organism while the phenotype is the physical appearance of an organism. Sounds insightful? Let’s discuss them more in detail. 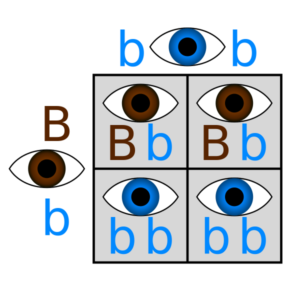 Definition of Genotype and Other Detail

DNA present in every organism’s body consists of a gene that uniquely encodes a trait. Genes exist in different forms across different organism (known as alleles) is due to the precise arrangement of nucleotides in a gene which even differs between the multiple copies of the same gene.

Moreover, the chromosome point containing the gene is precisely known as a locus. Alleles belonging to the same gene are either autosomal recessive or dominant. Furthermore, the subsequent combination of alleles possessed by an individual for a specific gene is its genotype.

Let us consider the classic example of our eye color because a gene uniquely encodes the eye color of an individual.

Thus, if the child inherits two different alleles, he will be called heterozygous and will have brown eyes while if the child has blue eyes, he is, therefore, homozygous for the blue eye allele. Besides, other such examples of genotype are Hair Color, Height, Shoe size.

Phenotype Definition and Other Detail

We can define phenotypes as the observable characteristics of an individual or organism. Unlike genotype, the organism or individuals cannot inherit the phenotype from its parents. However, the genotype and the below-listed factors influence phenotype:

The phenotype of an individual gets influence by several environmental factors. Moreover, these factors include nutrition, temperature, humidity, and stress. If we have noticed flamingos, they appear pink in color due to pigments in the organisms in their diet. However, the original color is white.

Another typical example is the skin color of an individual. In addition, our genes control the amount and type of melanin that our body produces. However, the darkening of existing melanin and increased melanogenesis, leading to a darker skin tone is a result of the exposure of the skin to UV light in sunny climates.

Differences between Genotype and Phenotype

Q. What we call the composite of an organism’s observable characters or traits?