Chromosomes are thread-like structures present in the nucleus. They are important because they contain the basic genetic material DNA. These are present inside the nucleus of plants as well as animal cells. Chromosomes were first discovered by Strasburger in 1815  and the term ‘chromosome’ was first used by Waldeyer in 1888. Human beings have 46 chromosomes in their body.  These are arranged into 23 pairs. Let us discuss the chromosome structure in detail. 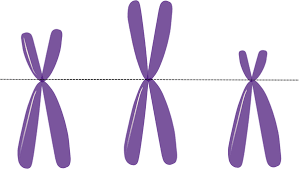 “A Chromosome looks like a  thread and is coiled material, made of proteins. Chromosomes are present in the nucleus of all the cells and contain the basic genetic material DNA, which passes from one generation to another”.

For the first time, Sutton and Bover suggested the role of chromosomes in heredity in 1902.

Examples of Types of Chromosomes

Q:  How do genetic disorders occur?

Ans: When DNA sequence in chromosomes changes, genetic disorders occur. The mutation refers to a change in the DNA sequence. The monogenic disorder occurs when a mutation occurs in one gene. Multifactorial genetic disorder occurs when mutation occurs in multiple genes. Human beings have 23 pairs of chromosomes.  All the diseases have a genetic component and the mutations pass from one generation to the other. Cancer, diabetes, obesity are examples of such diseases.