A chromatid is one-half of two similar copies of a duplicated chromosome. At the time of cell division, the twin copies unite together at the region of the chromosome, i.e. the centromere. Joined chromatids are sister chromatids.

It allows DNA to be compacted to fit within the cell nucleus. Chromatin fibers condense to form chromosomes. Chromatids form in both the cellular division processes of mitosis and meiosis. 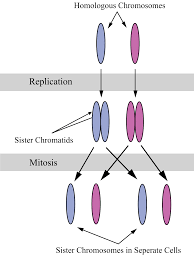 There are 4 parts in Mitosis process. Before the mitosis phase of the cycle, the cell undergoes a period of growth where it replicates its DNA and organelles.

In the first stage of mitosis called prophase, the replicated chromatin fibers form chromosomes. Each of the duplicate chromosomes consists of two chromatids (sister chromatids) connected at the centromere region. Moreover, the centromeres of chromosome serve as a place of attachment for spindle fibers during cell division.

In this second phase, the chromatin becomes even more compact, and sister chromatids line up along the mid-region of the cell or metaphase plate.

During anaphase, the sister chromatids divide and pull towards opposite ends of the cell by spindle fibers.

Each daughter chromosome has its own envelope of the nucleus. After the division of the cytoplasm that we call cytokinesis, two distinct daughter cells forms. Both cells are identical and contain the same number of chromosomes.

Meiosis is a form of cell division that creates gametes, or sex cells (eggs or sperm). It is a two-part cell division process that sex cells undergo. This process is similar to mitosis and consists of prophase, metaphase, anaphase and telophase stages. In this phase though cells go through these stages twice. Until anaphase II, sister chromatids do not separate in meiosis. After cytokinesis, four daughter cells are produced with half the number of chromosomes as the original cell.

The important parts of a chromatid are;

1) Telomere: Telomeres are short tandem repeats of nucleotides at the ends of chromosomes. As DNA is sticky, Telomeres prevent one chromosome from binding to another.

2) Short arm and long arm: The short arm of a human chromosome is symbolized by convention as “p”. The “p” symbol is from the French word “petit” meaning small. There are 2 arms in all human chromosomes, the p (short) arm and the q (long) arm. In addition, it separates the arms from each other only by a primary constriction that we know as the centromere. Moreover, the point at which the chromosome attaches to the spindle during cell division.

It authorizes cells to store two copies of their information in preparation for cell division. This is important to make sure that daughter cells are healthy and fully functional, carrying a full complement of the parent cells DNA. Safeguarding the two copies of the cells DNA joined together makes it easier for the cell to ensure that one copy goes to each daughter cell. When sister chromatids fail to separate during cell division, then the results can be severe.

Ans: If we talk about sister chromatids then these are two identical copies of a chromatid having the same genes and alleles. Whereas, in a non-sister chromatid, it inherits one of the two-strand from its mother while the other one from its father.

Q.2. How many sister chromatids are there in metaphase?

Ans: There are 46 chromosomes present during metaphase, but 92 chromatids.