An important theory in biology and molecular genetics, Biogenesis postulates the production of new living organisms from pre-existing life. Read ahead as we explore this seminal theory that changed age-old beliefs.

Biogenesis is based on the theory that life can only come from life, and it refers to any process by which a lifeform can give rise to other lifeforms. For instance, a chicken laying eggs, which hatch and become baby chicken. 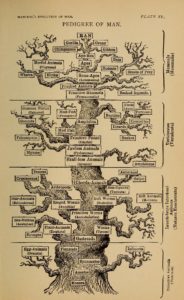 This idea, however, contradicts the age-old hypothesis of spontaneous generation, i.e. some inorganic substances, if left alone for a few days, can give rise to life ( such as bacteria, vermin, maggots, etc.) as well.

The term ‘biogenesis’ comes from ‘bio’ meaning ‘life’, and ‘genesis’, meaning ‘beginning’. Rudolf Virchow, in 1858, had come up with the hypothesis of biogenesis, but could not experimentally prove it. In 1859, Louis Pasteur set up his demonstrative experiments to prove biogenesis right down to a bacterial level. By 1861, he succeeded in establishing biogenesis as a solid theory rather than a controversial hypothesis.

What Was the Idea of Spontaneous Generation?

The belief in a spontaneous generation is age-old, quite literally. Aristotle in Ancient Greece first pronounces the idea. And consequently, the idea also came to be known as Aristotelian Abiogenesis.

The reason behind the resounding faith in this idea was perhaps the elusive and stealthy nature of the creatures attributed to it, i.e, mice, bacteria, flies, maggots, etc.

Francesco Redi, as far back as 1668, had set out to refute the idea of macroscopic spontaneous generation, by publishing the results of his experimentation on the matter. Instead of his experiment, Redi had placed some rotting meat in two containers, one with a piece of gauze covering the opening, and the other without it. 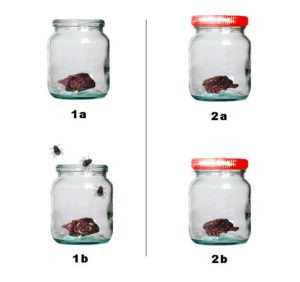 He noticed that in the container without the gauze, maggots would grow on the meat itself. However, when he provided the gauze, the maggots would appear on the gauze instead of on the meat. He also observed that flies tend to lay eggs as close to a food source as possible. Thus, he surmised the possibility of macroscopic biogenesis. 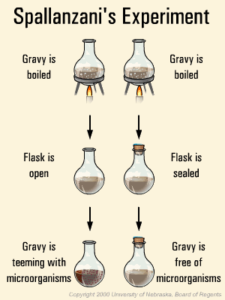 In 1768, Lazzaro Spallanzani suspected microscopic biogenesis and wanted to prove it experimentally. He boiled meat broth in a sealed container to avoid contamination. However, he was faced with a problem- upon heating a sealed container, the air inside would expand massively and would shatter the glass of the container.

He solved this problem by drawing out all the air in the container after sealing it. After experimenting with this manner, he achieved his desired results of a broth that had not clouded with bacterial growth, in line with the theory of biogenesis.

However, his inference was countered by critics who asserted that air was indispensable to support life, therefore the lack of bacterial growth should be attributed to the lack of air, rather than the fact that bacteria spread through contamination. For almost a century since this criticism lay unchallenged.

The caveat of Pasteur’s 1859 experiment was to establish that microbes live suspended in air, and can contaminate food and water, however, the microbes do not simply appear out of thin air. As the primary step to his experiment, Pasteur boiled beef broth in a special flask that had its long neck bent downwards and then upwards. 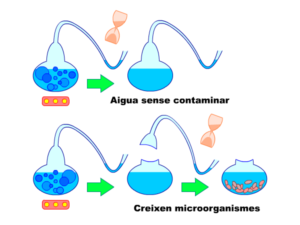 This interesting contraption ensured the free diffusion of air, and at the same time prevent any bacterial contamination. As long as the apparatus remained upright, the flask remained free of any bacterial growth.

Once we slant the flask, it allows the broth to pass beyond the ‘goose-neck’ bend of the flask’s neck. The broth became clouded with bacterial growth in no time. This path-breaking experiment not only silenced all the criticism based on Spallanzani’s experiment but also cemented the Law of Biogenesis.

Law of Biogenesis Vs. Evolutionary Theory

While the evolutionary theories take into account the lack of predators, the difference in the chemical composition of the Earth’s atmosphere during the inception of life on Earth, as well as the trial-and-error that had taken place over millions of years to bring us to the stage of life on this planet we witness now, these do not concern the law of biogenesis at all.

Whereas the evolutionary theory demonstrates how life on earth took millions of years of trial-and-error and conducive but very different atmospheric conditions, the theory of spontaneous generation had asserted that complex life could simply appear fully formed in a matter of days. This is the belief that biogenesis had successfully challenged.

Q. Who Has Propounded the Theory of Spontaneous Generation?

Ans. C. Aristotle. The idea was first propounded by Aristotle in Ancient Greece. Consequently, the idea came to be known as Aristotelian Abiogenesis.