By now, you are aware of the different types of market and the objectives of a firm. In this article, we will talk about equilibrium under a perfectly competitive market, the different equilibrium states, and how a firm decides on the level of output.

In a perfectly competitive market, a firm cannot change the price of a product by modifying the quantity of its output. Further, the input and cost conditions are given.

Therefore, the firm can alter the quantity of its output without changing the price of the product. We know that a firm is in equilibrium when its profits are maximum, which relies on the cost and revenue conditions of the firm.

These conditions can vary in the long and short-term. Before we take a look at the equilibrium states, let’s look at the demand curve of a product under perfect competition.

Demand Curve of a Product in a Perfectly Competitive Market 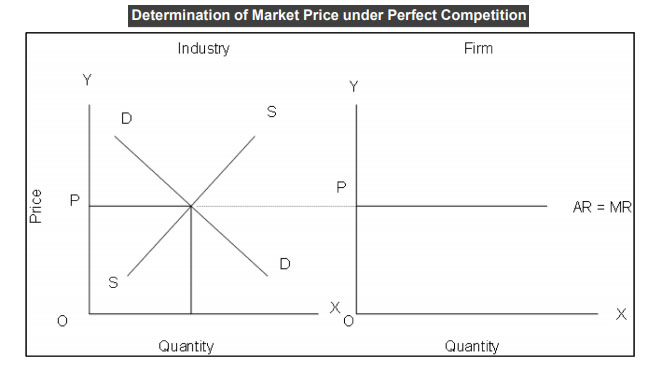 In the figure above, Price is on the Y-axis and Quantity on the X-axis. The left side of the figure represents the industry and the right side the case of a firm. The market demand curve is DD and the market supply curve is SS.

All firms receive this price in a perfectly competitive market. Also, firms are the price-takers and the industry is the price-maker. The Average Revenue (AR) Curve is the demand curve of the firm as it can sell any quantity it wants at the market price.

Short-run Equilibrium of a Competitive Firm

In the short-run, there the following assumptions:

We know that the necessary and sufficient conditions for the equilibrium of a firm are:

In other words, the MC curve must intersect the MR curve from below and after the intersection lie above the MR curve. In simpler terms, the firm must keep adding to its output as long as MR>MC.

This is because additional output adds more revenue than costs and increases its profits. Further, if MC=MR, but the firm finds that by adding to its output, MC becomes smaller than MR, then it must keep increasing its output.

Since it is a perfectly competitive market, the demand for the product of the firm is perfectly elastic. Further, it can sell all its output at the market price. Therefore, its demand curve runs parallel to the X-axis throughout its length and its MR curve coincides with the AR curve.

On the supply side, recall the four cost curves – AFC, AVC, MC, and ATC? Of these, the supply curve is that portion of the MC curve which lies above the AVC curve and is upward sloping. 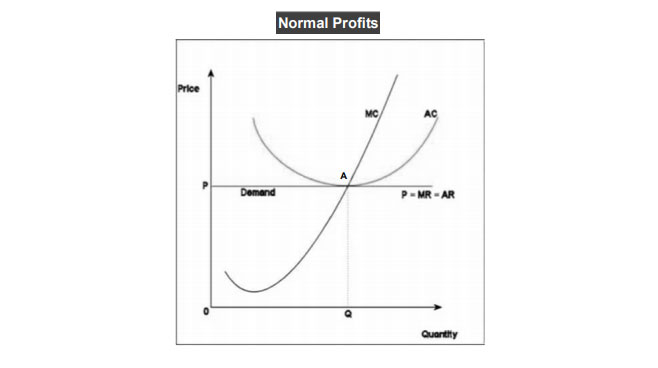 In the above figure, you can see that the costs and revenue are on the Y-axis and the Quantity is on the X-axis. Further, marginal costs cut the marginal revenue curve from below at point A. At point ‘A’, P is the equilibrium price and ‘Q’ is the equilibrium quantity.

Note that corresponding to the equilibrium quantity, the average cost is equal to the average revenue. It also means that the firm is earning a normal profit. 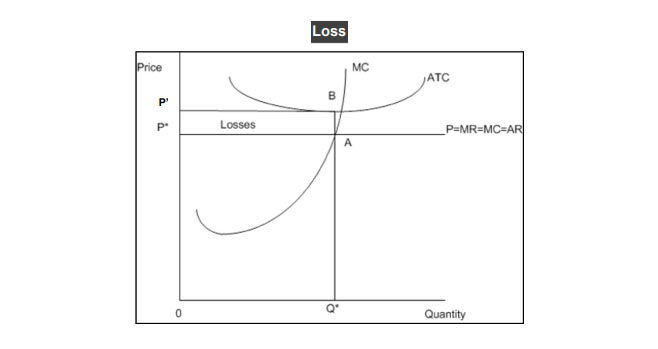 In the figure above, the cost and revenue curves are on the Y-axis and the quantity demanded is on the X-axis. Further, the marginal cost curve cuts the marginal revenue curve from below at point ‘A’, the equilibrium point.

That’s why the average revenue curve lies above the average cost curve corresponding to Q*. The firm is earning super-normal profits. The per unit profit is P’P* and the total profit is for quantity OQ* is P’P*BA.

In the figure above, we have taken five different prices to illustrate the supply behaviour and equilibrium of the firm. Further, each price has an average revenue curve which runs parallel to the X-axis and coincides with the MR curve.

When the price is OP0, the corresponding MR0 curve cuts the MC curve at two points – A and B. At point ‘A’, none of the conditions of equilibrium are satisfied.

At point ‘B’, the MC curve cuts the MR0 curve from below but AR is less than AVC. Therefore, the firm incurs a loss which is greater than its fixed cost if it decides to produce when the price is OP0. Hence, the firm closes down.

If the price is equal to OP1 (equal to the least possible average variable cost), then the firm decides to produce. In this case, the MC curve cuts the MR1 curve from below at point C and AR1 is equal to AVC. Therefore, the firm either does not produce at all or produces equal to OM1.

If the price is equal to OP2, it exceeds AVC but is less than ATC. The MR2 and MC curves intersect each other at point D. The firm produces an output – OM2. The firm still incurs a loss but it is less than its fixed costs.

If the price rises to OP3, the firm can recover all its costs including the fixed costs. The MC curve cuts the MR3 curve from below at point E and AR3 is equal to ATC. Therefore, all the conditions of the equilibrium are satisfied and the firm produces an output – OM3.

If the price rises even higher, the point of intersection of MR4 and MC curves moves to point F. In this case, the firm earns super-normal profits and produces OM4.

Therefore, in the short-run, even if a firm incurs losses, it continues production until it loses start exceeding its fixed costs. On the other hand, if the firm earns super-normal profits, then new firms entering the market wipe it out.

Q1. What are the main assumptions under the short-run period of a competitive firm?

Answer: The main assumptions under the short-run period of a competitive firm are:

Q2. What are the three possibilities for a firm’s equilibrium in a perfectly competitive market?

Answer: The three possibilities are: