In view of the coronavirus pandemic, we are making LIVE CLASSES and VIDEO CLASSES completely FREE to prevent interruption in studies
Home > Business Economics > Determination of Prices > Kinked Demand Curve

In an oligopolistic market, firms cannot have a fixed demand curve since it keeps changing as competitors change the prices/quantity of output. Since an oligopolist is not aware of the demand curve, economists have designed various price-output models based on the behavior pattern of other firms in the industry. In this article, we will look at the kinked demand curve hypothesis.

In many oligopolist markets, it has been observed that prices tend to remain inflexible for a very long time. Even in the face of declining costs, they tend to change infrequently. American economist Sweezy came up with the kinked demand curve hypothesis to explain the reason behind this price rigidity under oligopoly.

According to the kinked demand curve hypothesis, the demand curve facing an oligopolist has a kink at the level of the prevailing price. This kink exists because of two reasons:

The following figure shows a kinked demand curve dD with a kink at point P. 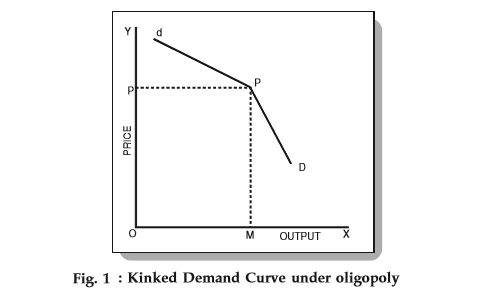 From the figure, we know that

This difference in elasticities is due to an assumption of the kinked demand curve hypothesis.

Each firm in an oligopoly believes the following two things:

There is logical reasoning behind this assumption. When an oligopolist lowers the price of his product, the competitors feel that if they don’t follow the price cut, then their customers will leave them and buy from the firm who is offering a lower price.

Therefore, they lower their prices too in order to maintain their customers. Hence, the lower portion of the curve is inelastic. It implies that if an oligopolist lowers the price, he can obtain very little sales.

On the other hand, when a firm increases the price of its product, it experiences a substantial reduction in sales. The reason is simple – consumers will buy the same/similar product from its competitors.

This increases the competitors’ sales and they will have no motivation to match the price rise. Therefore, the firm that raises the price suffers a loss and hence refrain from increasing the price.

This behavior of oligopolists can help us understand the elasticity of the upper portion of the demand curve (dP). The figure shows that if a firm raises the price of a product, then it experiences a large fall in sales.

Hence, no firm in an oligopolistic market will try to increase the price and a kink is formed at the prevailing price. This is how the kinked demand curve hypothesis explains the rigid or sticky prices.

Q: The kinked demand curve model of oligopoly assumes that: