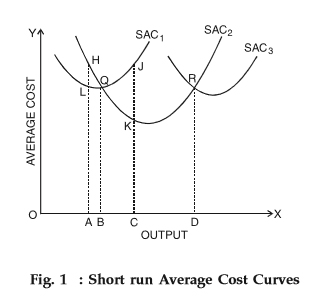 These SACs are also called plant curves. In the short run, a firm can operate on any SAC, given the size of the plant. For the sake of our understanding, let’s assume that there are only three plants that are technically possible. Therefore, the firm increases or decreases its outputs by changing the amount of the variable inputs.

However, in the long run, the firm examines each SAC to find the curve that allows it to produce a given level of output at the minimum cost. Hence, it chooses between SAC1, SAC2, and SAC3. From Fig. 1 above, you can see that to generate OB amount of output, the firm can choose between SAC1 and SAC2. Note that the firm will choose SAC1 due to the lower costs as compared to SAC2.

Further, you can also see that if the firm tries to produce an output OA, then it costs

Clearly, AH > AL. Therefore, the firm chooses SAC1. Similarly, if the firm tries to produce an output which is greater than OB but less than OD, then it chooses SAC2 since SAC1 involves higher costs. Also, for outputs larger than OD, the firm uses SAC3. Summing up, we can say that in the long run, the firm employs the plant yielding maximum output at minimum cost per unit. 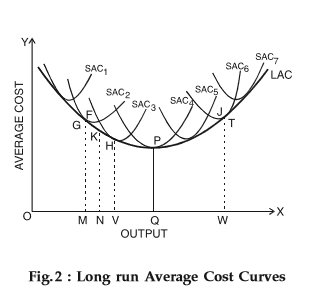 Therefore, the firm operates on SAC2 at point G. Similarly, the firm chooses different SACs based on its output requirement. It is also possible for the firm to produce the output OM with SAC3.

However, this will lead to a higher cost of production as compared to SAC2. On the other hand, to produce a higher output OV, the firm requires SAC3. If the firm uses SAC2 for the same, then it results in higher unit similarity.

Why does a long run average cost curve have a U-shape?

Then they remain constant for some time and eventually decrease. On the same lines, the LAC curve first declines and eventually rises. Returns to scale have an inverse relationship with the long run average costs. Usually, a firm experiences 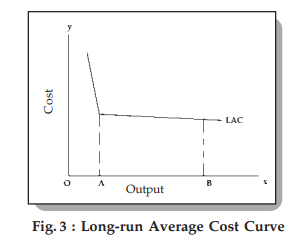 As you can see above, over the AB range, the curve is perfectly flat. This implies that over this range, all sizes of plant have the same minimum cost of production.

Q1. The positively sloped (i.e. rising) part of the long run average total cost curve is due to which of the following?

Answer: While analyzing the U-shape of a long run average cost curve, we can identify that the rising part of the LAC curve is due to both internal and external diseconomies of scale. Hence, the answer is Option a.