The Concept of the Long Run

The long run refers to that time period for a firm where it can vary all the factors of production. Thus, the long run consists of variable inputs only, and the concept of fixed inputs does not arise. The firm can increase the size of the plant in the long run. Thus, you can well imagine no difference between long-run variable cost and long-run total cost, since fixed costs do not exist in the long run.

Long run total cost refers to the minimum cost of production. It is the least cost of producing a given level of output. Thus, it can be less than or equal to the short run average costs at different levels of output but never greater.

In graphically deriving the LTC curve, the minimum points of the STC curves at different levels of output are joined. The locus of all these points gives us the LTC curve.

Long run average cost (LAC) can be defined as the average of the LTC curve or the cost per unit of output in the long run. It can be calculated by the division of LTC by the quantity of output. Graphically, LAC can be derived from the Short run Average Cost (SAC) curves.

While the SAC curves correspond to a particular plant since the plant is fixed in the short-run, the LAC curve depicts the scope for expansion of plant by minimizing cost.

Derivation of the LAC Curve

Note in the figure, that each SAC curve corresponds to a particular plant size. This size is fixed but what can vary is the variable input in the short-run. In the long run, the firm will select that plant size which can minimize costs for a given level of output.

So in the long run, the firm will produce till OM1 on SAC2. However, till an output level represented by OM3, the firm can produce at SAC2, after which it is profitable to produce at SAC3 if the firm wishes to minimize costs. 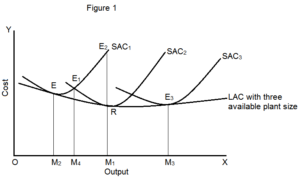 Thus, the choice, in the long run, is to produce at that plant size that can minimize costs. Graphically, this gives us a LAC curve that joins the minimum points of all possible SAC curves, as shown in the figure. Thus, the LAC curve is also called an envelope curve or planning curve. The curve first falls, reaches a minimum and then rises, giving it a U-shape.

Long run marginal cost is defined at the additional cost of producing an extra unit of the output in the long-run i.e. when all inputs are variable. The LMC curve is derived by the points of tangency between LAC and SAC.

Note an important relation between LMC and SAC here. When LMC lies below LAC, LAC is falling, while when LMC is above LAC, LAC is rising. At the point where LMC = LAC, LAC is constant and minimum.

Question: Why is the LAC also called the envelope curve?

Answer: The LAC curve suggests the long run optimization problem of the firm. The firm can choose a plant size to operate at in the long-run where all inputs are variable. Thus, the firm shall choose that plant at which it can minimize costs.

So, the LAC is derived by joining the minimum most points of all possible SAC curves of the firm at different output levels. Since the LAC thus obtained almost ‘envelopes’ the SAC curves faced by the firm, it is called the envelope curve.