The cost function is the mathematical relationship between the cost of a product and its various determinants. In this function, the unit cost or total cost is the dependent variable. In this article, we will look at the fixed and variable factors corresponding to the short and long runs of time and focus on short-run total costs.

During production, some factors are easily adjustable to sync with any change in the level of output. For example, a firm employs more workers to increase output or purchases more raw material to step-up production. These are variable factors.

However, factors like building, capital equipment, etc. are not so easily adjustable. The firm usually requires a longer time to make changes in them. These factors are fixed factors.

Based on the understanding of variable and fixed factors, let’s look at the short run and long run periods of time to better understand short-run total costs.

Long run, on the other hand, is a period of time in which the firm can make changes to all factors to get the desired output. Hence, we can say that in the long run, all factors become variable. It is important to note here that these factors, fixed or variable, result in costs. Take a look at the following diagrams: 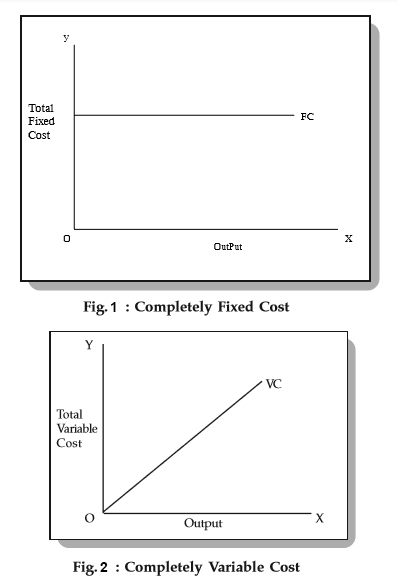 In Fig. 2, we can see that variable costs change with changes in the output. Variable costs include payments like wages, prices of raw material, power consumption, etc. If a firm shuts operation in the short run, then it does not use the variable factors of production and hence, does not incur variable costs.

These costs are neither perfectly fixed nor variable in relation to the changes in the output. For example, electricity charges include a fixed charge and a variable charge based on consumption. Fig. 3 shows a graph of semi-variable costs vs. output. 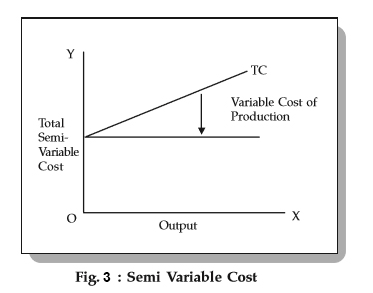 These costs increase in a stair-step fashion as shown in Fig. 4 below. They remain fixed over a certain range of output and suddenly jump to a new higher level when the output goes beyond a certain limit. For example, one foreman can handle a certain volume of work. Once the volume increase beyond his capacity, the firm needs to hire another foreman which doubles the salary cost for the firm. The total cost (TC) of business is the sum of the total variable costs (TVC) and total fixed costs (TFC). Hence, we have 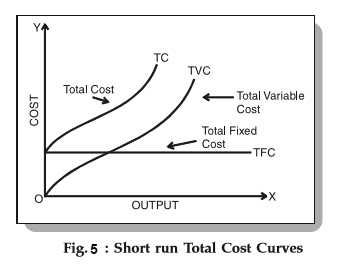 As we can see, the TFC curve starts from a point on the Y-axis and is parallel to the X-axis. This implies that even if the output is zero, the firm incurs a fixed cost.

The TVC curve, on the other hand, rises upwards. This implies that TVC increases as the output increases. This curve starts from the origin which shows that variable costs are nil when the output is zero.

The total cost curve (TC) is obtained by adding the TFC and TVC vertically.

Q1. Total cost in the short run is classified into fixed costs and variable costs. Which one of the following is a variable cost?

Answer: From the options given above, we can note that the costs of equipment, rent and interest payment on past borrowings are fixed in nature. These are unavoidable costs. Hence, the answer to the question is Option a – cost of raw materials – which varies with changes in the output.

Q2. Which of the following statements is correct concerning the relationships among the firm’s functions?

We know that the total cost (TC) of business is the sum of the total variable costs (TVC) and total fixed costs (TFC). Hence,

Therefore, option c is the correct statement concerning the relationships among the firm’s functions.