Short-run costs are important to understanding costs in economics. The distinction between short-run and long-run based on fixed and variable factors of production makes the concept of understanding short run costs simpler. Let us understand the concepts by way of examples, diagrams for graphical representation.

The Concept of Short Run

It is key to understand the concept of the short run in order to understand short run costs. In economics, we distinguish between short run and long run through the application of fixed or variable inputs.

Fixed inputs (plant, machinery, etc.) are those factors of production that cannot be changed or altered in a short span of time because the time period is ‘too small’. This makes the short run. Here, the inputs are of two types: fixed and variable.

In the long-run, all the inputs become variable (eg. raw materials). By this, we mean that all inputs can be changed with a change in the volume of output. Thus, the concept of fixed inputs applies only to the short-run. It is to short-run costs that we now turn.

The cost function is a functional relationship between cost and output. It explains that the cost of production varies with the level of output, given other things remain the same (ceteris paribus). This can be mathematically written as:

where C is the cost of production and X represents the level of output.

Fixed cost refers to the cost of fixed inputs. It does not change with the level of output (thus, fixed). Fixed inputs include building, machinery etc. Hence the cost of such inputs such as rent or cost of machinery constitutes fixed costs. Also referred to as overhead costs, supplementary costs or indirect costs, these costs remain the same irrespective of the level of output.

The cost incurred on variable factors of production is called Total Variable Cost (TVC). These costs vary with the level of output or production. Thus, when production level is zero, TVC is also zero. Thus, the TVC curve begins from the origin.

The shape of the TVC is peculiar. It is said to have an inverted-S shape. This is because, in the initial stages of production, there is scope for efficient utilization of fixed factor by using more of the variable factor (eg. Workers employing machinery).

Hence, as the variable input employed increases, the productive efficiency of variable inputs ensures that the TVC increases but at a diminishing rate. This makes the first part of the TVC curve that is concave.

Total cost (TC) refers to the sum of fixed and variable costs incurred in the short-run. Thus, the short-run cost can be expressed as

Note that in the long run, since TFC = 0, TC =TVC. Thus, we can get the shape of the TC curve by summing over TFC and TVC curves. 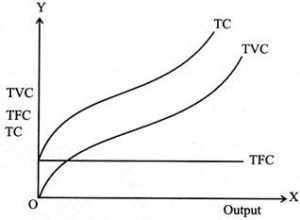 The following can be noted about the TC curve:

Question: Comment on the shape of the TC, TVC and TFC curves based on the following table: