It’s important that citations follow a standard format so that whoever is trying to read them will find it easy to understand. Citation formats are there for many different legal matters which include cases, statutes and secondary legal materials. Citations also help lawyers and students to easily look up case files and documents they are searching in a pile of other documents.

Knowing and understanding case citation is a very important skill for anyone who is studying, researching or involved with legal matters. These features help the reader understand the aspects and information about the case and moreover, get basic information at a glance.

The diagram given below will help you figure out how to read and interpret the basics of a case citation. 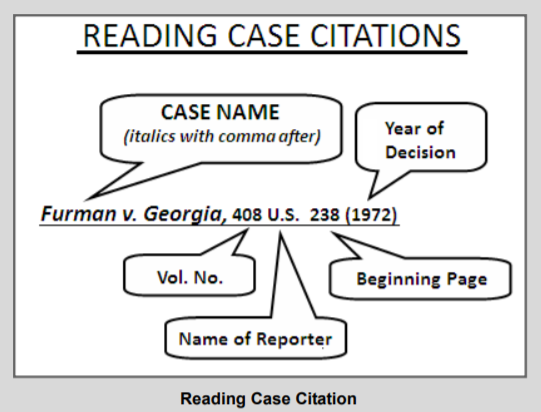 Some Variations When Using Case Citation

Generally, there are two names given for a case. This is to explain the parties involved. The first name is meant to identify the party which is bringing the court action and the name placed second is the name of the party against whom the action is being brought.

In almost all criminal law cases, the action is usually brought by the State against a person ( For eg. Rahul versus State of Madhya Pradesh). The defendant will, however, not always remain the same.

For e.g. in the case of Furman vs Georgia, Furman was initially a defendant in a murder case. In turn, Furman appealed against his conviction, and thus he became the person who was taking action against the State.

The year in which the court delivers the decision is thus called the year of decision. It is not necessary that the year of the decision will be the same as the year when the case was originally presented.

Solved Question for you.

Answer. These are the details of the above-given case citation

Name of the Case – Martin vs Texas.