A contract of guarantee refers to a contract to perform the promise or discharge the liability of a third person in case of any default by him. Surety is the person giving the guarantee. The person for whom the guarantee is given is the Principle Debtor. The person to whom the surety gives the guarantee is the Creditor. A guarantee may be oral or in writing. Here we will discuss the Discharge and Rights of Surety.

Discharge and Rights of Surety

A contract of guarantee shall also satisfy all the necessary conditions or elements of a valid contract. As per section 127, anything is done or any promise made for the benefit of the principal debtor provides sufficient consideration to the surety for giving the guarantee to the creditor.

Rights of a Surety

A surety has the following rights:

1. Rights against the Creditor

As per section 141, a surety is eligible to the benefit of every security which the creditor has against the principal debtor. This holds true even if at the time of entering into the contract of guarantee the surety was unaware of the existence of such a security.

2. Rights against the Principal Debtor

In a case where the principal debtor on discovering that the debt has become due, starts disposing of his properties in order to prevent seizure by the surety, the surety can compel the debtor to pay the debt and discharge him from his liability to pay.

3. Surety’s rights against the co-sureties

When a surety pays more than his share to the creditor, he has a right of contribution from the co-sureties, who are equally liable to pay. For example, Anthony, Barkha, and Chaya are the co-sureties to David for a sum of ₹30000 lent to Erwin who made default in payment.

Thus, Anthony, Barkha, and Chaya are liable to pay ₹10000 each as between them. So, in this case, if anyone of them pays more than ₹10000, he can claim the excess from the other two co-sureties so as to reduce his payment to ₹10000 only. However, if one of the co-sureties becomes insolvent, the other co-sureties shall contribute his share equally. 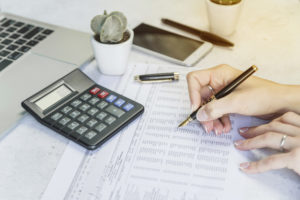 A surety is discharged from his liability on:

Solved Example on Discharge and Rights of Surety

What is the extent of surety’s liability?