A cheque is a negotiable instrument. It can either be open or crossed. An open cheque is the bearer cheque. It is payable over the counter on presentment by the payee to the paying banker. While a crossed cheque is not payable over the counter but shall be collected only through a banker. The amount payable for the crossed cheque is transferred to the bank account of the payee. Types of cheque crossing are General Crossing, Special Crossing and Restrictive Crossing. Let us learn about cheque crossing in more detail.

A crossing is an instruction to the paying banker to pay the amount of cheque to a particular banker and not over the counter. The crossing of the cheque secures the payment to a banker.

It also traces the person so receiving the amount of cheque. Addition of words ‘Not negotiable’ or ‘Account Payee only’ is necessary to restrain the negotiability of the cheque. The crossing of a cheque ensures security and protection to the holder. 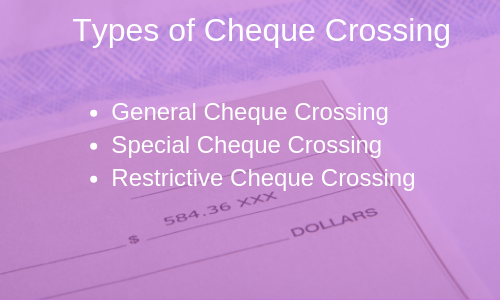 Let us learn about types of cheque crossing in greater detail.

In general crossing, the cheque bears across its face an addition of two parallel transverse lines and/or the addition of words ‘and Co.’ or ‘not negotiable’ between them.

Thus, in this case, the holder of the cheque or the payee will receive the payment only through a bank account and not over the counter. The words ‘and Co.’ have no significance as such.

But, the words ‘not negotiable’ are significant as they restrict the negotiability and thus, in the case of transfer, the transferee will not give a title better than that of a transferor.

Learn more about the Bills of Exchange in detail here.

In special crossing, the cheque bears across its face an addition of the banker’s name, with or without the words ‘not negotiable’.

In this case, the paying banker will pay the amount of cheque only to the banker whose name appears in the crossing or to his collecting agent.

Thus, the paying banker will honor the cheque only when it is ordered through the bank mentioned in the crossing or its agent bank.

However, in special crossing two parallel transverse lines are not essential but the name of the banker is most important.

This type of crossing restricts the negotiability of the cheque. It directs the collecting banker that he needs to credit the amount of cheque only to the account of the payee, or the party named or his agent.

Where the collecting banker credits the proceeds of a cheque bearing such crossing to any other account, he shall be guilty of negligence.

Also, he will not be eligible for the protection to the collecting banker under section 131 of the Act.

However, such crossing will have no effect on the paying banker. This is so because it is not his duty to determine that the cheque is collected for the account of the payee.

It is when the words ‘Not Negotiable’ are written between the two parallel transverse lines across the face of the cheque in the case of general crossing or in the case of special crossing along with the name of a banker.

The Not Negotiable Crossing does not mean that the cheque is non-transferrable. As per section 130 of the Negotiable Instruments Act, 1881 a person taking a cheque bearing a general or special crossing with the words ‘not negotiable’ will not have and is neither capable of giving a better title than that which the person from whom he took it had.

One of the important features of a negotiable instrument is that a person who receives it in good faith, without negligence, for value, before maturity and without knowing the defect in the title of the transferor, gets a good title to the instrument.

But, Not Negotiable Crossing takes away this important feature. In this case, the transferee does not get the rights of the holder in due course.

A bearer cheque bearing a general crossing with the words ‘not negotiable’ is stolen. Eventually, it comes into the possession of Aman who takes it in good faith and for value. Subsequently, Aman collects the amount of cheque through his bank. He receives the amount and the paying banker also pays the amount. Is Aman a holder in due course? Explain giving reasons.

Aman is not a holder in due course because the title of the cheque is tainted as it was stolen. The person who transferred the cheque to him was not the real owner of the cheque. Hence his title is defective.