Aspirin is essentially a medication that people use broadly all over the world. The chemical name of Aspirin is Acetylsalicylic Acid (ASA). It remains to be one of the oldest and most used forms of the drug that has common usage as an anti-inflammatory and antipyretic medication. We will further discuss about the Aspirin Formula below.

The chemical formula for Acetylsalicylic Acid is C9H8O4. Similarly, the extended formula for the same is said to be CH3COOC6H4COOH. Further, the molecular mass of it is around 180.159 g mol-1. The molecule of the same forms by an aromatic ring having 2 functional groups in position –orto: carboxylic acid is the first substituent and the second is an ester group.

Coming to the molecular geometry of Aspirin, it is planar. It is so due to the phenyl ring and carboxylic groups having sp2 hybridization. In the common representations which we use for organic molecules, the chemical structure of Aspirin is written as below: 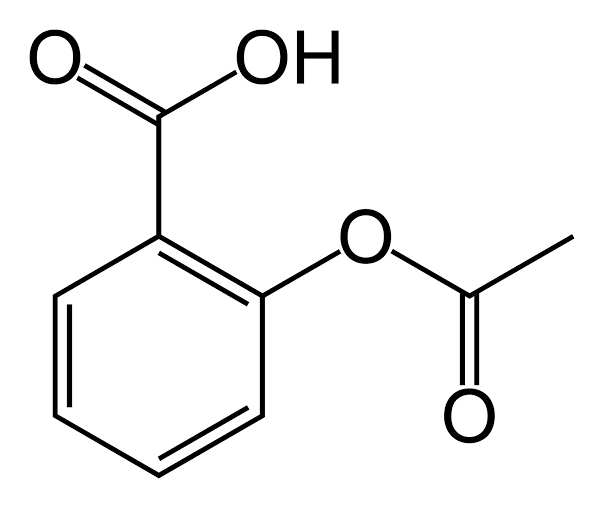 Much like other compounds, Acetylsalicylic Acid also does not occur naturally in nature. One cannot find it in nature and its origin dates back to 1853. A French chemist, by the name of Charles Frédéric Gerhardt, synthesized Aspirin for the first time ever in that year.

One can easily synthesize Acetylsalicylic Acid through the esterification of salicylic acid by the acetic anhydride. Therefore, the ester group replaces the hydroxyl group which is present in the salicylic acid. Similarly, one can catalyze the reaction by sulfuric acid.

Acetylsalicylic Acid is generally known by the ability of it being an anti-inflammatory drug. The mechanism of action is because it inhibits enzyme cyclooxygenase. Therefore, it causes suppression of Prostaglandin production (prostaglandins are molecules that are present in the process of inflammation). It is a very popular medicine and is available all over the world in large quantities. In the year of 1897, Bayer laboratory gave Acetylsalicylic Acid the name of Aspirin. Ever since the naming, the commercialization of it began. This medicine is most commonly used as an anti-inflammatory and antipyretic.

However, considering its use in recent decades, it has also gained a reputation for treating cardiovascular diseases. The other uses also include rheumatic fever and Kawasaki disease. Similarly, we also use it as an intermediate and raw material in producing other medicines or chemical compounds like 4-hydroxycoumarin.

When kept at room temperature. Aspirin will remain stable. However, try to keep it dry so as to avoid its hydrolysis. If you continue using it for a long period of time, it can result in causing gastritis and ulceration. Similarly, it is also incompatible with tough oxidizing agents and strong acids and bases.

Solved Example for You:

Answer– The correct answer is option A. Aspirin smells like Vinegar.