The ammonium nitrate that (NH4NO3) is a salt of ammonia and nitric acid, we use it widely in many fertilizers and explosives. Moreover, in the commercial-grade, there is about 33.5 per cent of nitrogen. All of these are utilizable by the plants. It is the most general and popular nitrogenous component of the artificial fertilizer segment. Ammonium nitrate is also useful for modifying the detonation rate of many other explosives, for example, nitro-glycerine in the ammonia dynamites, or also as an oxidizing agent in the ammonals, which are a combination of the ammonium nitrate and the powdered aluminium. Let’s take a look at the Ammonium Nitrate Formula below.

The chemical formula of the ammonium nitrate is NH4NO3 and on the other hand, its molecular formula is (N2H4O3) and it has a molar mass of 80.052 g/mol.

The ammonium nitrate is a salt that contains some ions that are a cation, the ammonium ion (NH4+) and an anion, the nitrate ion (NO3–). With the help of a strong ionic bond, the cation and anion stay together. The structure of the ammonium nitrate that is composed of the 2 ions, is present below in the form of an image. 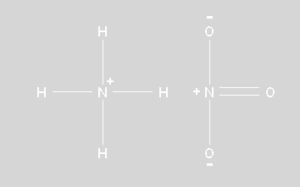 The ammonium nitrate occurs through a natural process. It occurs as a mineral in certain desert regions of the entire world. However, it is not abundant and is present as a mixture with various other minerals. It is not so difficult to prepare the synthetic ammonium nitrate.

We can commonly prepare the ammonium nitrate by the reaction of ammonia with nitric acid. This is a typical acid-base reaction to provide a salt (NH4NO3) as the product that we will be getting after the reaction.

The ammonium nitrate reacts with the metal hydroxides and release ammonia and forms alkali metal nitrate:

The ammonium nitrate leaves no residue when we heat it:

When we rapidly heat it or it explodes, the predominant reaction is:

Its physical state is in the form of solid and it typically exists as a white colour crystalline or a bead-like powder. It has a melting point of 169.6 °C. Whereas its boiling point is 210 °C, and it has a density of 1.72 g/cm3.

Ammonium nitrate is readily soluble when putting inside the water (H2O). Moreover, it is also highly hygroscopic in nature which means that it readily absorbs the water from the atmosphere and bundles up. It is not particularly reactive and at the same time, it is fairly stable also. It decomposes at high temperatures that are over 200 °C. This temperature helps to make nitrous oxide and water vapor.

We use the ammonium nitrate most commonly in the fertilizers as an excellent and inexpensive source of nitrogen and in instant cold packs. It is also useful for manufacturing explosives as it acts as a strong oxidizing agent. Particularly, the ammonium nitrate comes in use to prepare an industrial explosive that we call ANFO (Ammonium Nitrate Fuel Oil), which is made from 94% of ammonium nitrate and 6% of fuel oil.

While not severely toxic, the ammonium nitrate can cause health issues when ingested or inhaled in a high level of concentration. Ingesting the large amounts of the ammonium nitrate can also cause headaches, dizziness, abdominal pain, vomiting, weakness, irregular heartbeat, and convulsions, while due to inhalation of this powder breathing problems might occur such as coughing, sore throat, and even suffocation at a high level of concentrations.

Solved Example for You:

Question: What is the formula for ammonium nitrate?

Explanation: Ammonium ion NH+4 Nitrate ion NO−3 these all have equal, but opposing charges, so we take just one of each to ‘build’ the salt.