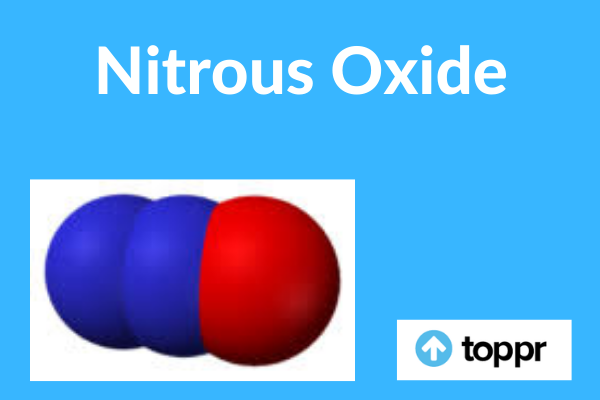 Nitrous oxide has remarkable medical uses. It is especially in use in surgery and dentistry, for its anaesthetic and pain-reducing effects. The colloquial name of nitrous oxide i.e., “laughing gas”, is given by Humphry Davy. The name given is due to the euphoric effects upon inhaling it.

A property of nitrous oxide that has led to its recreational use as a dissociative anaesthetic. Nitrous oxide has its presence in the World Health Organisation’s List of Essential Medicines. Nitrous oxide is the safest and most effective medicines needed in a health system. It is also in use as an oxidiser in rocket propellants, and in motor racing to increase the power output of engines.

The above reaction is the route by the commercial chemical industry to produce azide salts. It’s useful as detonators.

Nitrous oxide is in use in rocket motor as an oxidizer, as a food additive as an aerosol spray propellant, as a flavouring ingredient. It is useful in the manufacturing of semiconductors, Internal combustion engine. It has remarkable usage in the medical field as an analgesic and anaesthetic, in surgery, in dentistry. Nitrous oxide is also useful in car racing as a fuel additive, manufacture chemicals and more.

Environmental Impact due to Nitrous Oxide

Nitrous oxide has significant global warming potential being a greenhouse gas. On a per-molecule basis, It is over a 100-year period, nitrous oxide has 298 times the atmospheric heat-trapping ability of carbon dioxide. However, because of the low concentration i.e., less than 1/1,000 of that of \(CO_2\), its contribution to the greenhouse effect is less.

The contribution to the greenhouse effect is less than one third that of carbon dioxide. It is also less than water vapour and methane. On the other hand, since 38% or more of the Nitrous oxide entering the atmosphere, it is the result of human activity. Its concentration increases by to15% since 1750. Control of nitrous oxide is considered part of efforts to curb greenhouse gas emissions.

A 2008 study by Nobel Laureate Paul Crutzen states that the amount of nitrous oxide release attributable to agricultural nitrate fertilisers has been seriously underestimated. Most of the nitrous oxide presumably, would come under the soil and oceanic release in the Environmental Protection Agency data.

Nitrous oxide releases into the atmosphere through agriculture, when farmers add nitrogen-based fertilizers onto the fields. It is through the breakdown of animal manure. Approximately 79 per cent of all nitrous oxide releases in the United States come from nitrogen fertilization. Nitrous oxide is also releasing as a by-product of burning fossil fuel. Though the amount of release depends on which fuel is in use. It also emits through the manufacture of Nitric acid, which is in use in the synthesis of nitrogen fertilizers. The manufacturing of adipic acid, a precursor to nylon and other synthetic clothing fibres, also releases nitrous oxide.

Nitrous oxide has also been implicated in the depletion of the ozone layer. A 2009 study shows that \(N_2O\) emission is the single most important ozone-depleting emission. It is expected to remain the largest throughout the 21st century.

Answer: Oxide with nitrous, Nitrous oxide, also known as dinitrogen monoxide, laughing gas or nitrous. It is one of several nitrogen oxides, a colourless gas with a fun, sweet smell and taste. When we inhale Nitrous oxide, it induces insensitivity to pain accompanied by mild hysteria, often laughter.

Question 2: How is nitrous oxide contributes to everyday life?

Question 3: What type of bond is nitrous oxide?

Answer: All gases are nitrogen and oxygen. Therefore, the most common type of bonding is a covalent bond. Electrons switches in a covalent bond between two molecules. As if an ionic bond is when one molecule picks up an electron from the other, closer to the other molecule.