A liquid at high features a higher boiling point than when that liquid is at air pressure. For instance, water boils at 100 °C (212 °F) at sea level, but at 93.4 °C (200.1 °F) at 1,905 meters (6,250 ft) altitude. Different liquids will boil at different temperatures during a partial vacuum. The quality boiling point has been defined by IUPAC because the temperature at which boiling occurs under a pressure of 1 bar. 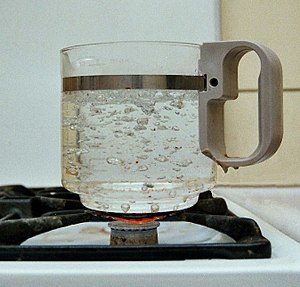 Liquids may change to a vapor at temperatures below their boiling points through the method of evaporation. Evaporation is essentially a surface phenomenon during which molecules located near the liquid’s edge, escape into the environment as vapor. On the opposite hand, boiling may be a process during which molecules anywhere within the liquid escape, leading to the formation of vapor bubbles within the liquid.

The Formula for Boiling  Point

It are often calculated as: Kb = RTb2M/ΔHv,

If the warmth of vaporization and therefore the vapor pressure of a liquid at a particular temperature is known then with the assistance of the Clausius–Clapeyron equation, the boiling point are often calculated as:

ΔTb is increasing within the boiling point and it’s defined as Tb (solution)-Tb (pure solvent).

bB is the molarity of the solution