Eutrophication is the process in which excessive growth of algae occurs in a water body due to excessive minerals and nutrients. This process may end in oxygen depletion of the water body after the bacterial degradation of the algae. One example is an “algal bloom”. Eutrophication is usually induced by the discharge of nitrate or phosphate-containing detergents, fertilizers, or sewage into an aquatic system. 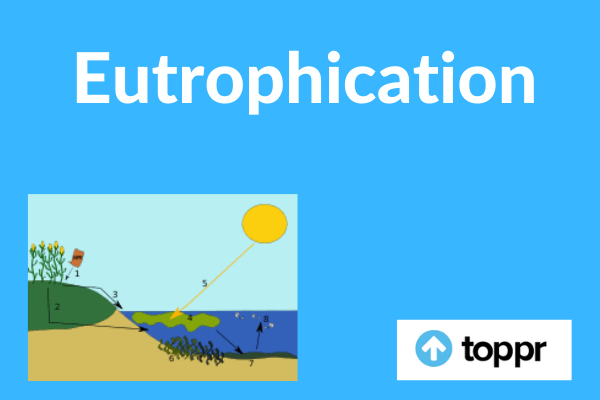 Eutrophication is an enrichment of water by nutrient salts that causes structural changes to the ecosystem such as increased production of algae and aquatic plants, depletion of fish species, general degradation of water quality and other effects that reduce and preclude use”.

Eutrophication most ordinarily arises from the oversupply of nutrients, most ordinarily as nitrogen or phosphorus, which results in overgrowth of plants and algae in aquatic ecosystems. After such organisms die, bacterial degradation of their biomass leads to oxygen consumption, thereby creating the state of hypoxia.

The primary limiting factor for eutrophication is phosphate. The presence of phosphorus normally helps in excessive plant growth and decay. It also favours simple algae and plankton and causes a severe reduction in water quality. Phosphorus may be a necessary nutrient for plants to measure and is that the limiting factor for plant growth in many freshwater ecosystems.

Eutrophication has an adverse effect on the terrestrial ecosystem. Increased nitrates in soil are frequently undesirable for plants. Many terrestrial plant species are endangered as a result of soil eutrophication. Meadows, forests, and bogs have usually low nutrient content and slowly growing species adapt to those levels.

Chemical sorts of nitrogen is a matter of concern with due to eutrophication. Terrestrial ecosystems believe the microbial organic process to convert \(N_{2}\) into other forms like nitrates. However, there’s a limit to what proportion nitrogen are often utilized. Ecosystems that receives more amount of nitrogen than the plants’ needs are nitrogen-saturated. Hence, saturated terrestrial ecosystems are able to contribute to both inorganic and organic nitrogen to coastal, freshwater, and marine eutrophication, where nitrogen is additionally typically a limiting nutrient.

Eutrophication became a pollution problem since the mid-20th century in both European and North American lakes and reservoirs. In general, there are particularly three ecological impacts which are troublesome: decreased biodiversity, changes in species composition and dominance, and toxicity effects.

Eutrophication poses a drag not only to ecosystems but to humans also. Reducing eutrophication should be a key concern when considering a future policy.  A sustainable solution for everybody, including farmers and ranchers, seems feasible.

Shellfish in estuaries: One proposed solution to prevent and reverse eutrophication in estuaries is to revive shellfish populations, like oysters and mussels. Oyster reefs helps in removing nitrogen from the water column and filter suspended solids. Thus, subsequently reducing the extent of harmful algal blooms or anoxic conditions.

Seaweed farming: It helps to adapt to global climate change. Seaweed, like kelp, also absorbs phosphorus and nitrogen. It is thus useful to get rid of excessive nutrients from polluted parts of the ocean. Some cultivated seaweeds have really high productivity and will absorb large quantities of N, P, \(CO_{2}\), producing a great deal of \(O_{2}\) have a superb effect on decreasing eutrophication.

Minimizing nonpoint pollution: Nonpoint pollution is that the most difficult source of nutrients to manage. The subsequent steps are recommended to attenuate the quantity of pollution which will enter aquatic ecosystems from ambiguous sources.

Geo-engineering in lakes: Geoengineering is the manipulation of biogeochemical processes. Usually, it is the phosphorus cycle, to realize a desired ecological response within the ecosystem. Phosphate is one of the major cause of algal growth, mainly cyanobacteria, so once phosphate is reduced the algal isn’t ready to overgrow.

Q.1. Can eutrophication be reversed?

Answer. Cultural eutrophication is harmful. But yes it can be reversed if the nutrients come from easily identified point sources such as sewage treatment plants or septic systems.

Q.2. Can you swim in a eutrophic lake?

Answer. The eutrophic body of water contains high amounts of nutrients. The water looks cloudy due to the numerous aquatic vegetation, organisms, as well as algae and plankton that drift on it. Therefore, one can’t swim or very difficult to swim in the eutrophic lake.

Q.3. What is the most harmful effect of eutrophication?

Answer. Oxygen depletion, or hypoxia, is a common effect of eutrophication in water. The direct effects of hypoxia include fish kills which in turn impact on the whole aquatic ecosystem.

Share with friends
Previous
Electron Configuration
Next
How To Make Slime