Ever wondered why different elements in the periodic table behave differently? Just like you and your best friend are two different entities altogether, various elements have some points of difference between them. Properties like valency, atomic radius, ionization enthalpy etc. are the properties of the individual atoms and are directly related to the electronic configuration. In this chapter, we will know more about the concept of atomic radius. 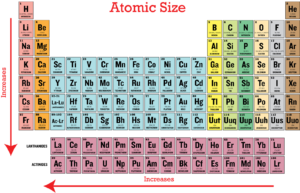 Therefore, we will study these three types of radius because they are vital for a better understanding of the subject.

Browse more Topics Under Classification Of Elements And Periodicity In Properties

It is one half the distance between the nuclei of two identical non-bonded isolated atoms or two adjacent identical atoms belonging to two neighboring molecules of an element in the solid-state. The magnitude of the Van der Waals radius is dependent on the packing of the atoms when the element is in the solid-state.

For example, the internuclear distance between two adjacent chlorine atoms of the two neighboring molecules in the solid-state is 360 pm. Therefore, the Van der Waals radius of the chlorine atom is 180 pm.

Variation of Atomic Radii in the Periodic Table

Variation Within a Period

Variation Within a Group

The atomic radii of elements increase with an increase in the atomic number from top to bottom in a group. As we move down the group, the principal quantum number increases. A new energy shell is added at each succeeding element. The valence electrons lie farther and farther away from the nucleus. As a result, the attraction of the nucleus for the electron decreases. Hence, the atomic radius increases.

Q: Why is the Van der Waals Radius always greater than the Covalent Radius?

Ans: The Van der Waals forces of attraction are weak. Therefore, the internuclear distance in the case of atoms held by Van der Waal forces is much larger than those between covalently bonded atoms. Since a covalent bond is formed by the overlap of two half-filled atomic orbitals, a part of electron cloud becomes common. Therefore, covalent radii are always smaller than the van der Waal radius.