Let us now look at the various applications of electronegativity. 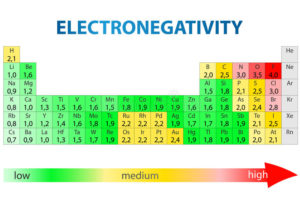 A bond between two similar atoms is non-polar. This is because the shared pair of electrons is equally attracted by the two atoms as the electronegativity of the atoms is the same. For eg, H2, Cl2, O2, N2

Higher the difference in electronegativity of the two binding atoms, the more is the dipole moment of the molecule. This is all about electronegativity. Hence, we move on to the next section about oxidation number.

Oxidation number is the number of electrons atom gain or loses in a chemical compound to form a chemical bond with another atom. It is the charge an atom appears to have when all other atoms are removed from it as ions. The loss or gain of an electron is also known as the degree of oxidation. The combination of the lose and gain of an electron is known as Redox reaction. Oxidation number is also known as Oxidation state, which can be zero, positive or negative. The oxidation number of atoms in O2, O3, P4, and S8 is zero.

Q: What is the oxidation number of Mn is KMnO4 ?

Therefore, the oxidation number of Mn = +7

Its a wonderful information