Chemical equilibrium refers to the state wherein both the reactants and the products present in the concentration have no tendency to change with the period of time during a chemical reaction. A chemical reaction achieves chemical equilibrium when the rate of forward reaction and that of the reverse reaction is same. Also, since the rates are equal and there is no net change in the concentrations of the reactants and the products – the state is referred to as a dynamic equilibrium and the rate constant is known as equilibrium constant. Let’s find out more.

Representation of the attainment of chemical equilibrium is – 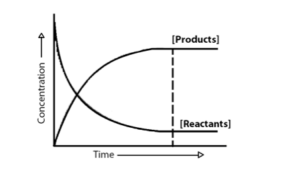 Law of mass action also forms the basis which states that the rate of a chemical reaction is directly proportional to the product of the concentrations of the reactants raised to their respective stoichiometric coefficients. Therefore, given the reaction –

By using the law of mass action here,

where, [A], [B], [C] and [D] being the active masses and k+ and k− are rate constants of forward and backward reactions, also the a, b, c, d are the stoichiometric coefficients related to A, B, C and D respectively. However, at the equilibrium – the forward and the backward rates are equal, stating –

or, Kc = Kf / Kb is the Law of Chemical Equilibrium. The equilibrium constant is therefore related to the standard Gibbs free energy change for the reaction which is stated by the equation –

where T states the temperature, R is the universal gas constant and Keq is the equilibrium constant. 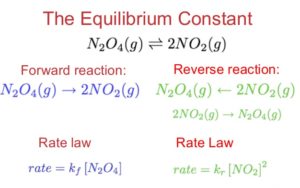 Question: Write the equilibrium constant expression for the reaction equation:

Question: A closed container has N2O4 and NO2 gases in it. It has been placed in the lab for many days. What would you consider the container and the gases to be?

Solution: A closed system since it has been in the lab, the temperature of the system is the same as its environment.