As time progresses, the products (C and D) accumulate while the reactants (A and B) deplete. This results in a decrease in the rate of the forward reaction and an increase in the rate of reverse reaction. Ultimately, both reactions occur at the same time reaching a state of equilibrium. This equilibrium can be reached from either direction.

The German chemist, Fritz Haber developed a method to manufacture ammonia from dinitrogen and dihydrogen. This process is the Haber’s process.

Haber started out with known amounts of dinitrogen and dihydrogen, maintained at high temperature and pressure, and noted the amount of ammonia produced at regular intervals. As the reaction proceeds, after some time, he noted that the composition of the mixture remains the same even though some reactants are still present. This shows that the reaction has reached equilibrium. 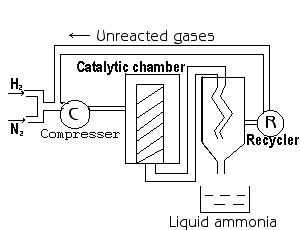 Further, Haber’s process demonstrates the dynamic nature of chemical equilibrium in the following manner. Keeping the experimental conditions same as above, hydrogen (H2) was replaced with deuterium (D2). This gives rise to ND3 as the product instead of NH3. Both reactions, one involving H2 and one with D2 were allowed to proceed to equilibrium.

When these two mixtures (H2, N2, NH3 and D2, N2, ND3) were mixed and left for a while, it was observed that the concentration of ammonia was the same as before. Although, mass spectrometry revealed that along with ammonia, all forms containing deuterium and dihydrogen were present (NH2D, NHD2, ND3, H2, HD and D2).

This shows that the scrambling of H and D atoms must be possible due to the continuation of the forward and reverse reactions. There would have been no mixing of isotopes if the reaction had stopped on reaching equilibrium.

Therefore, chemical reactions reach a state of dynamic equilibrium in which the rates of forwarding and reverse reactions are equal and there is no net change in composition.

Whether we start a reaction using reactants or products, equilibrium is attainable from both sides. Let’s consider the following reaction.

If we start the above reaction in the reverse direction, then the concentration of HI decreases while that of H2 and I2 increases till it reaches equilibrium. Therefore, if the total number of atoms of an element are same in a given volume, we get the same equilibrium mixture whether we start it with reactants or with products.

Solution: The answer is option D.

Thanks for this. It’s fantastic