Did you know that the rate of air pollution in China is so high that it’s visible even from the space? It’s no surprise why even our own capital city Delhi is soon been consumed by it as well. Imagine a world where there is no prevention of air pollution and we are out in a hospital while getting treated for its hazardous effects. Can’t yet imagine right? But what if, this is how the future looked like?

But what exactly is pollution? What is air pollution? Well, then let’s not waste any more time and scroll ahead to learn more and start acting on the solutions right away!

Table of content
1 Suggested Videos
2 Pollution
2.1 Browse more Topics under Pollution Of Air And Water
3 Air Pollution
4 What can be done?
5 Solved Example for You 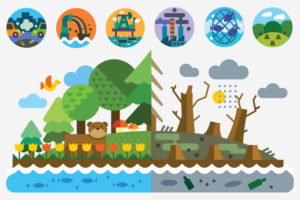 Every day when you read the newspaper, you’d find one article or the other related to pollution. How is pollution taking lives? Or how the rate of pollution hasn’t decreased since ages. If there are 85 kids healthy kids born every day, there are 10 kids who are born unhealthy or born with a disability and the rest 5 don’t even survive for a minute.
For the same ratio, there are another 100 people who are dying every day in a very horrible death because of pollution.

So, now the question arises as to what is Pollution? What causes it? And is there any way to tackle this issue?

Pollution can be defined as the phenomena that occurs when there’s release of dangerous pollutants such as chemicals into the air, water or land that harm our natural environment causing an imbalance in the ecosystem which affects our lifestyles severely. Pollution has already hit its peak, leading to global warming, various diseases and the organisms causing it and so much more,  thanks to modernization. As each day passes by in our lives, the risk of pollution increases.

Pollution can be classified into two categories: Air Pollution and Water Pollution.

The air that we breathe is the same anywhere we go in the world; unfortunately so is the air pollution that is being caused. This air that we breathe is made up of a combination of gases, such as 78% of nitrogen, 21% of oxygen, and the rest 1% comprising of carbon dioxide, argon, methane, ozone, water vapor, etc.

Air Pollution can be defined as the contamination caused in the air due to the release or presence of toxic and unwanted pollutants (i.e. pollution-causing substances) which then poses as a major risk to all living beings on the planet and having an even severe and hazardous effect on the planet as a whole.

Air pollution is one of the major contributors to the cause of global warming and is slowly increasing day by day. If the steps for prevention of air pollution aren’t taken in time, there shall soon come a time when the only source of breathing would be oxygen masks.

What can be done?

In today’s time, the rate has increased so much that we’re in desperate need of prevention of air pollution soon. Therefore even a small step initiated by you could lead to big wonders. Developed countries have already started their work on reducing the levels of sulfur dioxide, smog, and smoke in order prevent people’s health from deteriorating any further and ensuring they breathe fresh air. 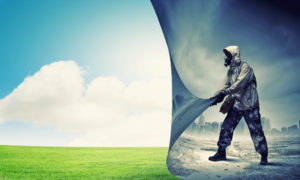 When questioned the first and major effect of air pollution that comes to people’s mind is global warming and hence they even agree that in order to curb global warming, various measures need to be taken; steps that will reduce an individual’s carbon footprint (i.e. the degree of carbon dioxide one releases in the atmosphere).

Following are few measures one can do on a daily basis for the prevention of air pollution at large:

a. One way is to put taxes on carbon emissions and even higher taxes on gasoline so that people and companies will have incentives to limit the emissions of carbon dioxide and other harmful gases in the air and pollute less.

c. While purchasing a new vehicle, consider one that pollutes less, is the most efficient and emits zero or less smoke. The best option is to go for a CNG friendly itself.

d. Walking to short distances and as much as possible to avoid pollution and cluttering of vehicles which emit harmful gases.

e. Encouraging use of public transport rather than driving.

f. Maximize the use of a fan instead of an air conditioner.

g. Planting as many trees as possible every day for a fresh and cleaner air and to maintain the natural balance in the ecosystem.

h. Using the data being provided by the government and various other agencies (who regularly monitor the levels or air pollutions) to create awareness about the issue of air pollution within your community.

i. Use of fossil fuels to conserve energy such as wind energy, solar energy, and hydropower.

There are so many other ways for the prevention of air pollution. Can you list some of them on your own?

Q. Oxygen constitutes nearly how much percentage of the atmosphere?

Sol: b. Oxygen constitutes 21% of the atmosphere. 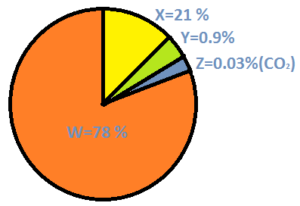 The given pie chart explains the composition of the atmosphere in which Nitrogen is 78%, Oxygen is 21%, Carbon Dioxide is 0.03%, while the remaining 0.9%constitute the trace gases like argon, helium etc.