Have you ever noticed how on a cloudy night it’s warmer than on any other nights when the skies are clear? Instead on a cloudy night, it should actually be cooler; isn’t it? So what causes this bizarre effect and how does it happen? Well, it happens because of an effect which is known as ‘The Greenhouse Effect’. What, is greenhouse effect? What causes this effect? How harmful can it be?  Let us know more about it below.

What is the Greenhouse Effect?

The ‘Greenhouse Effect’ is defined as the increase in Earth’s surface temperature caused by the trapping of atmospheric heat. This makes the earth’s temperature warmer than it actually would, than getting warmer directly by the sun. Some of the heat gets absorbed into the atmosphere and is bounced back into space when sunlight reaches the earth. Now, this heat is redirected back towards the Earth when greenhouse gases such as carbon dioxide and methane that are present in the atmosphere absorb this heat.

In 1827, Joseph Fourier discovered the greenhouse effect which was experimentally verified in 1861 by John Tyndall and in 1896 was quantified by Svante Arrhenius.

Mechanism of the Greenhouse Effect

Now once this heat gets absorbed by the earth’s surface, it is trapped in the earth’s atmosphere and thereby adding to increase the earth’s temperature. This effect is what we call the ‘Greenhouse Effect’.

Therefore, if the amount of greenhouse gases present in the earth’s atmosphere is high then the earth’s temperature too will keep getting higher; which is what has been happening lately adding to the greenhouse effect and warming up earth than it already is.

Extreme weather conditions, global warming, and rise in sea levels are the results of the greenhouse effect.

Causes of the Greenhouse Effect

The greenhouse effect occurs when greenhouse gases like carbon dioxide, methane, nitrous oxide and fluoride gases synergize with sun’s energy. These gases are composed of more than three atoms and it’s this atomic structure that enables them to trap the atmospheric heat which is absorbed by the earth’s surface. 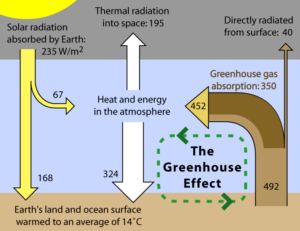 What was once white as snow and twinkled like a shining star is now slowly fading away; thank to air pollution. The Taj Mahal known for its white beauty has now started to turn yellowish-brown due to deposition of dust and carbon-containing particles which are emitted when fossil fuels, biomass or garbage is burnt. 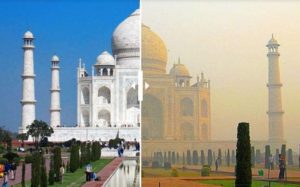 Source:Indiatoday.in
What couldn’t happen in decades, air pollution has managed to do so. Oxygen combined with moisture, sulphur dioxide sets on the marbles and corrodes the marble, result of which is fungus known as the ‘marble cancer’ by the scientists.
Scientists have found 3% of black carbon, 30% of brown carbon and the rest of it to be dust. Scientists not just in India but abroad are trying to find a solution to this problem and hopefully will soon come up with a solution.

Q. Greenhouse Effect is the major cause of:

d. All of the above

Sol: a. The greenhouse effect is the major cause of ‘Global Warming’.