Definite Article: English Grammar can certainly be tricky, we understand. There could be many rules to remember and exceptions along with it. But in this chapter, we assure you, there’s only one word to learn about- one of the most commonly used words– the. That’s right- the word the is the only Definite Article that there is. The one true king of its kind. Before we take you to a branch, we’d like to paint the tree for you to understand best. Let’s take a quick overview of what articles are, let’s get started:

Articles are words that refer to or point out the noun. There are only three articles in English grammar – the, an and a, and they are categorized into two broad categories- definite and indefinite. These three have their different uses:

An: As a thumb rule, you can remember that all the words that start with a vowel SOUND will take an before them. Why did we emphasize on the sound? Well, we all have learnt in earlier grades that there are 5 vowels in english grammar – a, e, i, o u. A common myth is that an goes before only the words that start with these vowel letters. Like an artist, an elephant, and such.

But interestingly, vowels in english are not about the letters a, e, i, o, u in written, but their sounds. In written english, there can be consonants that take an  before them. For example, an hour, an honor. But can you say an hospital? We are afraid not. And here’s why: The word “hospital” begins with the sound of “h” which is not a vowel. So what goes before “hospital”? That leads us to our another article, a.

A: Quite simple, anything which is not a vowel sound is a consonant. Remember, it’s the speech form that matters and not the written form. Some examples of this are- a cupboard, a giraffe, a brand. Well, now we know what goes before “hospital”, it’s a hospital.

Now that you have a sufficient understanding of articles and their usage, let’s pick our first champion of the clan. What we are discussing in this article is about the only definite article- the and it’s correct usage. Let’s get straight into the only Definite article, shall we? 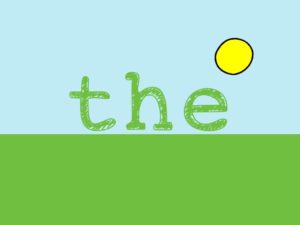 Boost Your Vocabulary by learning One Word Substitution.

3. Before nouns that are unique: Like the sun, the moon, the Arabian sea, the Bermuda triangle, the Eiffel tower, the Himalayas and so on. In such cases, there is no need to set a context before as these are already one and only and hence very specific. If you see the example of the Golf course above, golf courses are many and hence there was a need to specify which one is being talked about specifically. On the other hand, nouns that are unique such as the sun or the moon are already specific and unique.

4. Superlative adjectives that are used as definite nouns. Basically, for someone and something exclusive. An example will set this straight for you:

5. Before adjectives used as nouns. Usually used in phrases or advice. Check out some examples:

9. With some Comparative statements:

Now that we have covered almost all use cases of the definite articles, it will be intriguing to compare these cases to the other family of articles – Indefinite articles.

Share with friends
Previous
Air Pollution and What can be done?
Next
Introduction to Adverbs