Cellulose is a specific type of molecules which is consisting of hundreds or even thousands of carbon, hydrogen and oxygen atoms. Cellulose is the kind of main substance that can be found in the walls of plant cells. It is helping plants to remain stiff and upright. Although we cannot digest cellulose, still it is important in the diet in the form of fibre. For example, cellulose is present in the ratio of 30% in a tree which can be made into paper.

Actually, it is a kind of polysaccharide having the molecular formula \(C_{6}H_{10}O_{5})_{n}\), which is composed of glucose monomers. It is very useful in the manufacture of numerous products such as paper, textiles, pharmaceuticals, and insulation. Some other names of Cellulose are cellulose ester, fibre, paper, cellulosic, fibre. 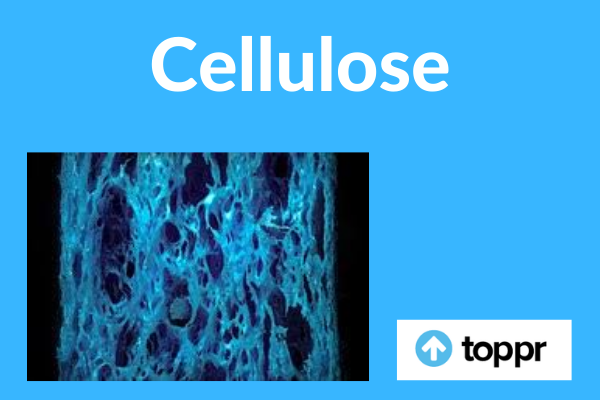 Cellulose is being considered the most abundant organic compound on the earth. The chemical formula of cellulose as a chain is \(C_{6}H_{10}O_{5})_{n}\). Actually, it is a complex carbohydrate that consists of oxygen, carbon, and hydrogen. It is a chiral, tasteless compound without any odour. It was first discovered by French chemist Anselme Payen in the year 1838. Cellulose is a kind of organic compound that is water-soluble as well as biodegradable.

During the year 1890, it was being used to produce the first thermoplastic termed celluloid. In natural cotton, the amount of cellulose present is 90%. Also, the amount of cellulose present in the wood is 40-45% and in dried hemp, it is 57%. Cellulose is a popular example of polysaccharide and useful for structural function in plants. Cellulose is the unbranched kind of glucose, which is residue polymer put together via beta-1,4 connections. Hence, it enables the molecule to form long, straight chains.

These are the active polyhydroxy aldehydes or ketones, which are producing such units on the hydrolysis. These are mainly produced by plants like cane sugar, starch, glucose, cellulose etc. The major classification of carbohydrates are as follows:

Polysaccharides are containing a large number of monosaccharide units, which are joined together by the glycosidic linkage.

Its synthesis is mainly limited to plants and bacteria, with some specific animals.

Cellulose is different from the rest kind of polysaccharides. The unique property of cellulose is due to its unique structure. These properties are also depending on the number of glucose subunits present in it. Some of its properties are as follows:

Uses of the Cellulose

Answer: Cellulose is the insoluble dietary fibre, consisting of glucose polymers present in all kind of cell walls of plants. Foods like leafy green vegetables, such as kale, sprouts from Brussels and green peas are containing cellulose.

Q.2: What is the cellulosic material?

Answer: Cellulosic materials are providing the structure to plants and strength to the stems. Cellulose and hemicellulose, together known as cellulosic materials. It can be broken down into sugars, which further can be fermented into ethanol.

Q.3: What is the richest source of cellulose?

Answer: Green beans are the richest in cellulose and hemicellulose. On a wet-weight basis, fresh apples and peaches and canned carrots and frozen potatoes are having a higher ratio of it.

Q.4: Can we digest cellulose?

Answer: No, we cannot digest cellulose because they lack the enzymes essential for breaking the beta-acetyl linkages. Therefore, the undigested cellulose acts as fibre that aids in the functioning of the intestinal tract in our body.