Benzene has the molecular formula \(C_ {6}H_ {6}\) and is an organic chemical compound. The benzene molecule consists of six atoms of carbon bound in a planar ring with one atom of hydrogen bound to each of them. Benzene refers to a hydrocarbon as it contains only carbon and hydrogen atoms. It is one of the elementary petrochemicals and is a common constituent of crude oil. Benzene is an aromatic hydrocarbon due to the cyclic continuous pi bonds between the carbon atoms. Often it is abbreviated as PhH.

Benzene is a solvent with a soft fragrance that is colourless and extremely flammable. It is partly responsible for the smell surrounding petrol (gasoline) stations. Because of its toxicity, benzene, a major industrial chemical, finds minimal application in consumer products. A single atom of hydrogen is bound by each carbon atom. At a temperature of 5.5 ° C, benzene melts and boils at 80.1 °C. 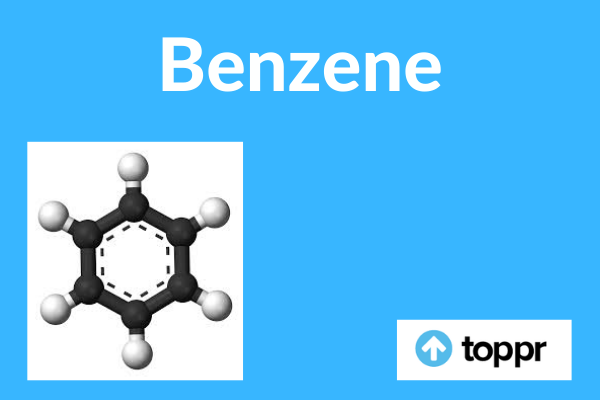 The chemical properties of alkenes, the only unsaturated hydrocarbons that were previously known, are not seen by benzene. Benzene undergoes chemical reactions, but substitution rather than addition is its characteristic response. For instance, only one compound with the molecular formula C6H5Br forms when benzene reacts with bromine in the presence of ferric chloride as a catalyst:

The principles of the hybridization of atomic orbitals and the resonance principle, developed in the 1930s by Linus Pauling, offered the first adequate explanation of the benzene structure. With C-C-C and H-C-C bond angles of 120°, the carbon skeleton of benzene forms a regular hexagon. Carbon makes use of sp2 hybrid orbitals for this form of bonding. By the overlap of carbons, each carbon forms sigma bonds to two neighbouring carbons. \(sp^_{2}-sp^ _{2}\) hybrid orbitals and one sigma bond to hydrogen by overlapping the orbitals of \(sp^{2}-1s\).

X-ray diffraction reveals that, at 140 picometers (pm), all six carbon-carbon bonds in benzene are of the same length. The lengths of the C-C bond are larger than a double bond (135 pm) but shorter than a single bond (147 pm). Electron delocalization induces this intermediate distance. The electrons for C=C bonding are spread equally between each of the six carbon atoms. The definition of the molecular orbital involves the creation of three delocalized π orbitals covering all six carbon atoms, whereas the description of the valence bond involves an overlay of resonance structures.

This stability is likely to contribute to the unusual molecular and chemical properties of aromaticity. As a part of organic molecules, derivatives of benzene occur so frequently that the Unicode Consortium has assigned a symbol with the code U+232C in the Miscellaneous Technical block to represent it with three double bonds, and U+23E3 for an electron density variant.

Four chemical processes lead to the generation of industrial benzene: catalytic reforming, hydrodealkylation of toluene, disproportionation of toluene, and cracking of steam. Between 1978 and 1981, catalytic reformates account for about 44–50 per cent of the global production of U.S. benzene, according to the ATSDR Toxicological Profile for benzene.

There is an average reaction yield of over 95%. In place of toluene, xylene and heavier aromatics replace them, with comparable quality.

Benzene, which raises the risk of cancer and other diseases, is a carcinogen and is also a notorious cause of bone marrow failure. Large volumes of epidemiological, clinical, and experimental research correlate benzene with aplastic anaemia, acute leukaemia, defects of the bone marrow, and cardiovascular disease.

Acute myeloid leukaemia (AML), aplastic anaemia, myelodysplastic syndrome (MDS), acute lymphoblastic leukaemia (ALL), and chronic myeloid leukaemia are the specific hematologic tumours that benzene is associated with. Narcosis is the result of acute occupational exposure to benzene: pain, dizziness, drowsiness, nausea, tremors, and lack of consciousness. Alcohol consumption increases the harmful effect. Benzene is a mild irritant to the eye and an irritant to the scalp.

Human exposure to benzene is a public health issue because benzene is abundant in gasoline and hydrocarbon fuels that are in use everywhere. The liver, kidney, lung, heart, and brain are hit by benzene. It can cause breaks in the DNA strand, chromosomal damage, etc. In species, including humans, benzene causes cancer. The mechanism for benzene synthesis is complex and starts in the liver. There are several enzymes present which include cytochrome P450 2E1 (CYP2E1), quinine oxidoreductase, GSH, and myeloperoxidase NQ01 or DT-diaphorase or NAD(P)H dehydrogenase (quinone 1).

Q.1 Write the properties of benzene?

Ans. The properties are:

Q.2 What are the uses of Benzene?

Ans. Benzene reacts with other substances as a building block chemical to create several other chemicals, products, and, finally, consumer goods. It is useful in manufacturing any forms of dyes, detergents, and prescription medications. More than half of the global output of benzene is converted into ethylbenzene, a precursor to styrene mainly uses for the manufacture of polymers and plastics such as polystyrene and EPS.

Q.3 Is Benzene acidic or basic?