Look around and you will see Polymers are everywhere. From the plastic bottle, you carry to school, to the silicone rubber tips on your favourite earphones. The nylon and polyester in your sneakers. Not only inanimate objects, many proteins in your body are polymers. So let us now look into the classification of polymers.

The word “Polymer” is derived from two Greek words,  ‘Poly’ that means many (numerous)  and ‘Mer’ which means units. In basic terms, a polymer is a long-chain molecule that is composed of a large number of repeating units of identical structure. These identical structures, we understand as a unit made up of two or more molecules, join together to form a long chain. 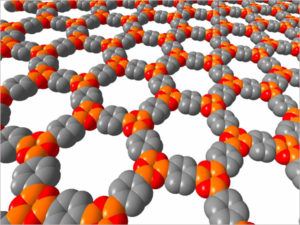 Simply stated, a polymer is a long-chain molecule that is composed of a large number of repeating units of identical structure. Those monomers can be simple — just an atom or two or three — or they might be complicated ring-shaped structures containing a dozen or more atoms.

1] Classification Based on Source

The first classification of polymers is based on their source of origin, Let’s take a look.

The easiest way to classify polymers is their source of origin. Natural polymers are polymers which occur in nature and are existing in natural sources like plants and animals. Some common examples are Proteins (which are found in humans and animals alike), Cellulose and Starch (which are found in plants) or Rubber (which we harvest from the latex of a tropical plant ).

Synthetic polymers are polymers which humans can artificially create/synthesize in a lab. These are commercially produced by industries for human necessities. Some commonly produced polymers which we use day to day are Polyethylene (a mass-produced plastic which we use in packaging) or Nylon Fibers (commonly used in our clothes, fishing nets etc.)

Semi-Synthetic polymers are polymers obtained by making modification in natural polymers artificially in a lab. These polymers formed by chemical reaction (in a controlled environment) and are of commercial importance. Example: Vulcanized Rubber ( Sulphur is used in cross bonding the polymer chains found in natural rubber) Cellulose acetate (rayon) etc.

2] Classification Based on Structure of Polymers

Classification of polymers based on their structure can be of three types:

These polymers are similar in structure to a long straight chain which identical links connected to each other. The monomers in these are linked together to form a long chain. These polymers have high melting points and are of higher density. A common example of this is PVC (Poly-vinyl chloride). This polymer is largely used for making electric cables and pipes.

As the title describes, the structure of these polymers is like branches originating at random points from a single linear chain. Monomers join together to form a long straight chain with some branched chains of different lengths. As a result of these branches, the polymers are not closely packed together. They are of low density having low melting points. Low-density polyethene (LDPE) used in  plastic bags and general purpose containers is a common example

In this type of polymers,  monomers are linked together to form a three-dimensional network. The monomers contain strong covalent bonds as they are composed of bi-functional and tri-functional in nature. These polymers are brittle and hard. Ex:- Bakelite (used in electrical insulators), Melamine etc.

3] Based on Mode of Polymerisation

Polymerization is the process by which monomer molecules are reacted together in a chemical reaction to form a polymer chain (or three-dimensional networks). Based on the type of polymerization, polymers can be classified as:

These type of polymers are formed by the repeated addition of monomer molecules. The polymer is formed by polymerization of monomers with double or triple bonds (unsaturated compounds). Note, in this process, there is no elimination of small molecules like water or alcohol etc (no by-product of the process). Addition polymers always have their empirical formulas same as their monomers. Example: ethene n(CH2=CH2)  to polyethene -(CH2-CH2)n-.

These polymers are formed by the combination of monomers, with the elimination of small molecules like water, alcohol etc. The monomers in these types of condensation reactions are bi-functional or tri-functional in nature. A common example is the polymerization of Hexamethylenediamine and adipic acid. to give Nylon – 66, where molecules of water are eliminated in the process.

Read about Polymers of Commercial Importance.

4] Classification Based on Molecular Forces

Note that the properties exhibited by solid materials like polymers depend largely on the strength of the forces between these molecules. Using this, Polymers can be classified into 4 types:

Elastomers are rubber-like solid polymers, that are elastic in nature. When we say elastic, we basically mean that the polymer can be easily stretched by applying a little force.

Thermoplastic polymers are long-chain polymers in which inter-molecules forces (Van der Waal’s forces) hold the polymer chains together. These polymers when heated are softened (thick fluid like) and hardened when they are allowed to cool down, forming a hard mass. They do not contain any cross bond and can easily be shaped by heating and using moulds. A common example is Polystyrene or PVC (which is used in making pipes).

Thermosetting plastics are polymers which are semi-fluid in nature with low molecular masses. When heated, they start cross-linking between polymer chains, hence becoming hard and infusible. They form a three-dimensional structure on the application of heat. This reaction is irreversible in nature. The most common example of a thermosetting polymer is that of Bakelite, which is used in making electrical insulation.

In the classification of polymers, these are a class of polymers which are a thread like in nature, and can easily be woven. They have strong inter-molecules forces between the chains giving them less elasticity and high tensile strength. The intermolecular forces may be hydrogen bonds or dipole-dipole interaction. Fibres have sharp and high melting points. A common example is that of Nylon-66, which is used in carpets and apparels.

The above was the general ways to classify polymers. Another category of polymers is that of Biopolymers. Biopolymers are polymers which are obtained from living organisms. They are biodegradable and have a very well defined structure. Various biomolecules like carbohydrates and proteins are a part of the category.

Q: Which of these polymers occur naturally?

Sol: The correct option is “B”. On the basis of classification of polymers based on their sources, we know that Nylon and PVC are synthetic polymers. While starch and cellulose are naturally occurring polymers.

Q: Which catalyst is used for the Polymerisation of olefins?

Find the answer by learning Polymers of Commercial Importance.