Cells are important elements of living. Be it humans or plants or animals, every living organism is composed of cells. Naturally, if they are the structural and functional unit of living, there has to be something peculiar about them? Do you know what it is? What is it about cell structure and functions that make them so important? Let’s find out.

Every organ in our body performs a variety of different functions such as digestion, assimilation, and absorption. Similarly, in the plants too, there are different organs of the plant which performs specialized or specific functions. For instance, the roots of the plants help in the absorption of minerals and water.

In our body and in the body of every living organism, every organ is composed of smaller parts known as tissues. A tissue is a group of like cells that perform a specific function. Let’s learn more about the cell structure and functions.

Parts of the Cell 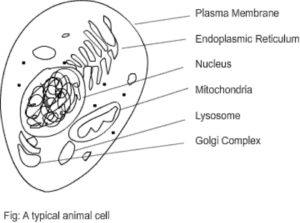 One of the most important parts of the cell is the cell membrane. The cell membrane acts as a semi-permeable barrier. It allows only a few molecules across it and fences the majority of organically produced chemicals inside the cell.

The primary components of the cell are – cell membrane, nucleus, and cytoplasm. The nucleus and cytoplasm are enclosed within the cell membrane that is also known as the plasma membrane. It works to separate cells from one another and also the cell from the surrounding medium. The plasma membrane is porous and allows the movements of materials or substances both inward and outward.

Cell membrane offers shape and rigidity to the cell. In the case of the plant cells, besides the cell membrane, there is also an outer thick layer that is known as the cell wall. This additional layer which surrounds the cell membrane is necessary for offering the requisite protection to the plants. 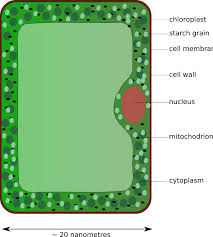 The cells of the plants need protection against the variations in temperature, high wind speed, atmospheric moisture, etc. The plants are exposed to variations since they cannot move. You can easily observe the cells in the lead peel of Rhoeo, Tradescantia or Elodea.

Another important part of the cell is the cytoplasm. It is a jelly-like substance that is present between the nucleus and the cell membrane. There are a number of other components or organelles of the cell that can be found in the cytoplasm. These are mitochondria, Golgi bodies, ribosomes, etc.

The nucleus is believed to be the most important component of the living cell. It is located in the centre of the cell and is usually spherical in shape. You can stain the nucleus and see it clearly by using a microscope.  The nucleus is separated from the cytoplasm by a membrane known as the nuclear membrane. This membrane is also porous and allows the moment of materials between the cytoplasm and the inside of the nucleus.

If you have a microscope of a higher magnification, you can see a smaller spherical body found in the nucleus. This is the nucleolus. Besides the nucleolus, the nucleus also has several thread-like structures known as the chromosomes. The chromosomes carry genes and support in transfer or inheritance of characters from the parents to the offspring. You can only see the chromosomes when the cell divides.

You can think of genes as CD or memory stick that is used to carry data or music from one computer to another. In the similar fashion, genes carry genetic codes that are responsible for the unique physical characteristics of an animal or a plant.

Nucleus works as the control centre of the activities of the cell. The entire content of a living cell is known as protoplasm. It includes the cytoplasm and the nucleus. Protoplasm is called the living substance of the cell.

Functions of a Cell

As you already know that a cell is a structural and functional unit of living. Let us study 6 of the most vital functions performed by a cell.

You know a house is made of bricks. Similarly, an organism is made up of cells. Though there are certain cells such as collenchyma and sclerenchyma are present for offering structural support however in general too, all cells generally provide the structural basis of all organisms.

In complex organisms such as humans, the tissues grow by simple multiplication of cells. Hence, cells are responsible for the growth of the organism. The entire thing takes place via a process of mitosis.

Cells import the nutrients that are used in the different chemical process which take place inside them. As a result of these processes, a waste product is produced. Cells then work to get rid of this waste. In this manner, the small molecules like the such as oxygen, carbon dioxide, and ethanol pass through the cell membrane by diffusion. This method is known as passive transport. On the other hand, the larger molecules like the proteins and polysaccharides, go in and out of the cell via active transport.

Cell is responsible for metabolism that includes all the chemical reactions that take place inside an organism to keep it alive.

A cell helps in reproduction by the processes of mitosis (in more evolved organisms) and meiosis.

There are some differences between a plant and animal cell structure and functions. Here, we have pointed out some of the notable differences.

Q: What is the name given to cells without any organized nucleus?

Ans: Cells without a well-organised nucleus, i.e. the cells which lack a definite nuclear membrane is known as prokaryotic cells.