Have a look around you and you will find at least five things made out of rubber. From your car tyres to erasers use rubber as their main ingredient. Rubber is the most vastly used polymer by mankind. Let us learn some interesting facts about natural and synthetic rubber. 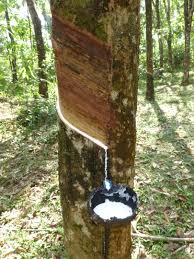 We have commonly been using rubber for industrial and household purposes for over a 1000 years. Natural rubber is a plant polymer, we harvest it from rubber plants in the form of Latex. An average plant will produce about 19 pounds of latex annually.

Natural rubbers are also known as elastomers (hydrocarbon polymer) due to its high elasticity. It is made up of a thick stretchy white liquid which is latex and some suspended solid particles which are impurities. The monomer for synthesis of natural rubber is commonly known as Isoprene, that is 2-methyl-1,3-butadiene.

The natural form is always in cis-configuration which is cis – 1, 4 – polyisoprene. This polyisoprene molecule has a coil structure. Various chains link together with weak Van der Waals bond to give it this coil formation. Hence this structure is responsible for its elasticity and tensile strength.

Natural Rubber in its raw form does not have ideal properties or qualities. It is extremely brittle at temperatures below 283 K. And at higher temperatures of above 335 K, it turns too soft and gluey. It also has the propensity to absorb water molecules and hence reducing its strength.

To improve the features of rubber and increase is elasticity it undergoes a chemical process, Vulcanization. Here we heat a mixture of raw rubber and sulfur (or another such accelerator) to temperatures between 373 k and 415 K. Here the sulfur chemically combines with the polymers and forms bridges (cross-links) between long-chain molecules. This helps with the elasticity and tensile strength.

Synthetic rubbers are artificial polymers. It is man-made rubber which industries produce by synthesizing it from crude oil or petroleum and other such minerals and by-products. Its main property is its elasticity or deformation under stress or external force. But it also has the ability to return to its original shape and size without any permanent change or damage.

Let us take a closer look at the preparation of two important synthetic rubbers. 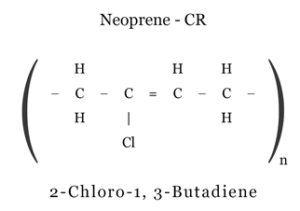 Also known as Polychloroprene it is said to be the first synthetic rubber developed in 1931. It is one of the most important rubbers in the world and has an annual consumption of 300000 tons. It is formed by the free radical polymerization of chloroprene.

Neoprene has good mechanical strength. Neoprene is also highly resistant to heat and chemical interference. It has many applications and is widely used for cables. moulded goods, conveyor belts, gaskets etc.

Butadiene rubbers are known to be the most elastic rubbers. It was produced in the United States and Europe during the World War I days due to a shortage of natural rubber. Copolymerization of two compounds, in this case, styrene and butadiene, in the presence of a catalyst give us this elastomer. The ratio of styrene to butadiene is about 25:75. It has a heat resistance superior to natural rubber, but lower tensile strength.

Styrene Butadiene Rubbers main purpose is to make tyres for automobiles. It is also used in adhesives, shoe soles and floor tile.

Q: Dicarboxylic acids react with diols to form which type of copolymer?