Colorimetry refers to the field of determination of a coloured compound concentration in a solution. So, a colorimeter is a light-sensitive device. Its use is for measuring the transmittance and absorbance of light passing through a liquid sample.

The variation in the intensity of electromagnetic radiation in the visible wavelength region of the spectrum following transmission or reflection by an object or solution is measured during color measurement. Because the amount and color of light absorbed or transmitted depends on the parameters of the solution, including the concentration of particles in it, such a test can aid in determining the concentration of chemicals.

We also use this device for a wide range of applications across the chemical and biological fields. It includes the determination of a solution’s concentration, reaction rates, bacterial culture growth and laboratory quality control.  Now let us discuss the parts, principles, and uses of this device. 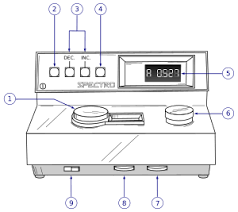 The colorimeter’s primary components are as follows:

Monochromator: A monochromator is a device that divides light into distinct wavelengths and selects the wavelength under observation.

Sample Holder: The cuvettes or test tubes containing the color sample solution are inserted in the sample holder. At visible wavelengths, these are constructed of glass.

Photo Detector System: When light falls into this system, it generates an electric signal, which is then reflected as a reading in the galvanometer.

Measuring Device: The galvanometer is used as a measurement device, converting electrical signals into readings that correspond to the intensity of light.

A Colorimeter’s operating mechanism is divided into three key steps:

Step 2: A light ray of a specific wavelength specific to the sample is directed toward the solution. The light passes through a number of filters and lenses. The lens aids in the correct navigation of the light beam. The filters divide the incoming light into distinct wavelengths, allowing just the needed wavelength to reach the test solution in the cuvette.

Step 3: The light beam is transmitted, reflected, and absorbed by the solution as it enters the cuvette. The transmitted ray strikes the photodetector device, which measures the intensity of the transmitted light. The galvanometer reads the detector’s electrical signals and displays them in digital form. The reading correlates to the test solution’s absorbance or optical density.

A colorimeter is based on the photometric approach, which asserts that when an incident light beam of intensity Io passes through a solution, some of the light is reflected (Ir), some is absorbed (Ia), and the rest of the light is transmitted (It).

Ir is omitted because the measurement of Io is adequate to estimate Ia. To calculate Io and It, the amount of light reflected is kept constant.

According to Beer’s Law, the amount of light absorbed is directly proportional to the concentration of the solute present in the solution.

c = concentration of the solution

According to Lambert’s Law, the amount of light absorbed is directly proportional to the length and thickness of the solution under consideration.

A = test absorbance of the test

b = length/thickness of the solution

The colorimeter’s operating principle is based on Beer-law, Lambert’s which states that the amount of light absorbed by a color solution is directly proportional to its concentration and the length of a light path through it.

A = absorbance of the solution

c = concentration of the solution

A colorimeter consists of changeable optics filters which select the wavelength that the solution absorbs the most, in order to maximize accuracy.

A colorimeter uses the wavelength variation ranging from 400 to 700 nanometers. Nowadays the filament lamp and filters of a colorimeter are replaced by several (light-emitting diodes) of different colours.

We use this device to test for water quality, by screening for chemicals such as chlorine, fluoride, cyanide, dissolved oxygen, iron, molybdenum, zinc, and hydrazine. It also helps to determine the concentrations of plant nutrients (such as phosphorus, nitrate, and ammonia) in the soil or haemoglobin in the blood

Colorimeters are frequently used in the medical business to estimate biochemical samples such as blood, urine, cerebral spinal fluid, plasma, serum, and so on. They are used to assess the color contrast and brightness of mobile, computer, and television screens in order to give the greatest viewing experience for users.

Furthermore, it helps in the identification of substandard and counterfeit drugs. Many food industries use his device. Paints and textile manufacturers use Colorimeter. This device also checks the quality and consistency of colours in paints and fabrics, to ensure the same quality.

Advantages and Disadvantages of Colorimeter

Answer. Jules Duboscq (1817-86), a French optical instrument maker, invented this type of colorimeter in 1854. It was one of the earliest colorimeters and one of the most popular.

Share with friends
Previous
Benzoic Acid - Definition and Chemical Properties
Next
What is a Solvent?