Table of content
1 What is a Solvent in Science?
1.1 Types of Solvent
1.2 Examples of Solvent
1.3 The Solution, Solubility, and Solvation
1.4 Uses Of Solvent
1.5 Solved Question for you

What is a Solvent in Science?

A substance in which solute is dissolved and forms solution is a solvent. Generally solvent is a liquid but it can also be a solid, a gas, or a supercritical fluid.

The quantity of solute which is dissolved in a specific volume of solvent varies with temperature. Some of the uses of solvents are dry cleaning, paint thinners, nail polish removers, glue solvents, spot removers, detergents, and perfumes.

Water is a solvent for polar molecules. Water is the most common solvent as it has the capacity to dissolve almost all solute.

Ions and proteins present in a living cell also dissolve in water inside a cell. Solvents have various applications in chemical, pharmaceutical, oil, and gas industries for chemical syntheses and in purification processes.

On the basis of polarity there are two types of solvents they are polar and non-polar. Polarity is the ability of a solvent to dissolve any solute.

Water is a universal solvent used everywhere because of the high polarity of the water molecule. This mechanism of water by which it dissolves solutes applies to all the same polar solvents, such as methanol.

The arrangement of ions gives a molecule distinct positive and negative charges which have the ability to react or interact with the molecules of polar solutes electrostatically. 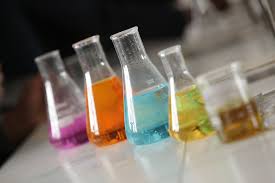 Non-polar solutes such as fats, oils, and greases, do not dissolve in water. When we mix them they form an emulsion.

Non-polar solvents, such as carbon tetrachloride and benzene, use the same mechanism to dissolve solutes that is an electrostatic attraction.

Solvents which contain carbon and hydrogen only are hydrocarbon solvents such as gasoline, benzene, toluene, hexane, etc.

Those solvents which contain halogens such as chlorine (Cl), fluorine (F), bromine (Br) or iodine (I) in their composition are halogenated solvents such as carbon tetrachloride, chloroform, and chlorofluorocarbons (CFCs).

The Solution, Solubility, and Solvation

Whereas when two substances which are not able to dissolve with each other such as sand and water are insoluble substances. A solution is a mixture in which all the substances are distributed uniformly which leaves no residue.

Solubility is the ability of one substance to dissolve with another substance. In other words, solubility is the maximum amount of solute that dissolves in a solvent to form an equilibrium.

Equilibrium is a state where reactants and products reach a balanced state means no more solute can be dissolved in the solvent in the fixed temperature and pressure.

Such a solution is a saturated solution. Substances which dissolve with each other completely in any proportion and form a homogeneous solution are miscible substances.

Those substances which are not able to dissolve with each other are immiscible substances. Solvation is the interaction between the solute and solvent to attain stability by ion-dipole and hydrogen bonding attractions.

The uses of solvents may be the following:

Q. What are the main factors that affect solubility?

C: Nature of solute and solvent

D: All of the above.