Petroleum is known as “Black Gold.” This name itself is an indicator of its human meaning. The “mother of all commodities” is known to be crude oil as it produces various products such as pharmaceuticals, chemicals, fuel, synthetic fabrics, etc.

Petroleum is a liquid that occurs in rock formations naturally. This consists of a complex mixture, plus other organic compounds, of various hydrocarbon molecular weights. Petrochemicals are primarily manufacturing at a few production sites across the globe. Oil is the raw material for many industries as well. Petroleum is retrieving largely by oil exploration.

About 100 million barrels are in use every day by the planet. The second-largest source of energy after coal is petroleum or mineral oil in India. For many manufacturing industries, it supplies heat and lighting power, lubricants for machinery and raw materials. Petroleum refineries act as a “nodal industry” for synthetic textiles, fertilizers, and various chemical industries. 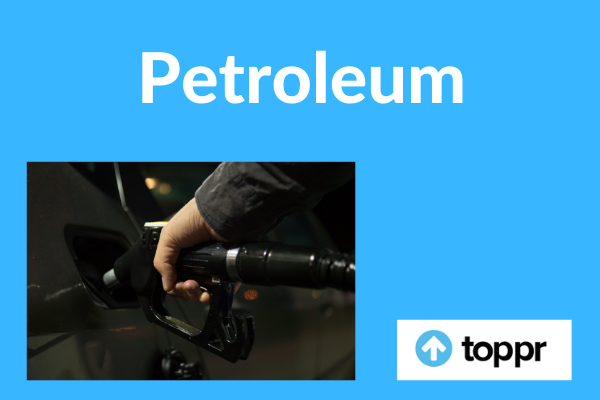 Petroleum is a fossil fuel which derives from prehistoric fossilized organic materials. Vast volumes of these remains get to accumulate on sea or lake bottoms. This approach lets the organic matter shift, first into a waxy substance as kerogen and then by a mechanism as catagenesis with more heat into liquid and gaseous hydrocarbons. Petroleum formation results from hydrocarbon pyrolysis in many primarily high-temperature or pressure endothermic reactions, or both. The three phases of transformation are:

Aerobic bacteria prevent the rotting of organic matter after it has been submerged under a sheet of soil or water in the absence of sufficient oxygen. At first, this matter begins to fall apart mainly by hydrolysis because of such anaerobic bacteria: polysaccharides and proteins convert into basic sugars and amino acids, respectively. The products produced in this process combine themselves to form fulvic acid.

Some phenolic compounds in previous reactions are useful as bactericides and antibiotic compounds. Thus, at around 10 m below the water or sediment, the activity of anaerobic bacteria stops. In the lower areas, extreme heat and pressure built up as more layers of organic matter sunk into the sea. As a result, the mixture’s compounds start to blend into kerogen. The total process of kerogen formation is diagenesis, from the beginning of anaerobic decay.

They are very huge complexes consisting of large processing units and storage tanks. An oil refinery is an industrial processing plant in which crude oil is refined and processed into more useful materials, such as petroleum naphtha, diesel, jet fuel, heating oil, petroleum kerosene, etc. The refinery consists of a basic structure and refining process layout, which is entirely governed by the location of the refinery, the target products, and the economic conditions. And probably, in any respect, no two refineries are alike. Steps to separate petroleum from various other products are:

Using the boiling temperature variations, the oldest and most common method of splitting products into various components (called fractions) is performed. In essence, you heat crude oil, cause it to spray, then condense the vapour. for example, Chemical refining can break longer chains into shorter chains. The refining process refers as the “downstream” sector in the industry, while the “upstream” sector refers to the production of raw crude oil. Depending on the gasoline, refinery turns diesel fuel into gasoline. Four types of end products are form during petroleum refining. They are:

1. Transportation – Petroleum is a primary transportation energy source. Almost two-thirds of petroleum-based transport fuels are made. Derivatives of petroleum such as gasoline/petrol, diesel, liquefied petroleum gas (LPG), jet fuel, and marine fuel provide transport fuels. Although gasoline is useful in automobiles, motorcycles, light trucks, and ships while diesel is useful for trucks, buses, etc. as fuel. Heavy motor vehicles use diesel as the fuel.

2. Lubricants – In almost all industries, lubricants (one of the derivatives of petroleum) are useful in several types of machines. To minimize friction, lubricants are in use in all kinds of automobiles and industrial equipment. Also, they are useful in cooking, ultrasound scanning, and medical examinations. Typically, lubricants include 90% of base oil, usual percentages of petroleum.

3. Chemical Industry – Petroleum by-products are in use as raw materials by many chemical firms. They are useful in the processing of chemical fertilizers, synthetic fibre, synthetic rubber, plastics, pesticides, insecticides, perfumes, dyes, paints. The refining of crude oil results in the production of many by-products that are useful for household and industrial purposes. Plastic, detergents, oil, Vaseline, wax, and butane, among others, are significant by-products of petroleum. Paraffin wax is useful in the production of candles, ink, crayons, etc.

Answer. The method of refining and the by-products of petroleum usage are harmful to the environment. Underwater drilling creates leaks, tar sands mining strips the soil and consumes scarce water, and fracking, whether performed incorrectly or inappropriately, kills the water table. Pipeline distribution of fuel can destroy the natural atmosphere. The carbon which is discharge into the world rises temperatures which lead to global warming. Many products made with petroleum derivatives do not biodegrade rapidly, and water sources get contaminated by the overuse of fertilizers.

Q.2 Explain the composition of petroleum?

Answer. Petroleum Consists of six different elements which are:

It also consists of different types of hydrocarbons. Their percentage varies from oil to oil. The hydrocarbon present is as follows:

Answer. Kerogen is the sedimentary organic part of sedimentary rocks insoluble in the normal organic solvents. A variety of organic materials, including algae, pollen, wood, vitrinite, and structureless material, make up kerogens.