In view of the coronavirus pandemic, we are making LIVE CLASSES and VIDEO CLASSES completely FREE to prevent interruption in studies
Computer Aptitude and Knowledge > Networking > The OSI Model

For a better awareness of the computer systems, a rigorous understanding of the OSI model is very important. The Open System Interconnection (OSI) model defines a networking framework to implement protocols in seven different layers. To know what that means and many other facts about the OSI model let’s explore the article further!

It divides network communication into seven layers. Layers 1-4 are considered the lower layers and mostly are concerned with data around. Layers 5-7, the upper layers, contain application-level data. Therefore each layer has a specific task to do.  This model works on the principle of ‘pass it on”. As one layer passes the data by adding the functionalities of that particular layer. The next layer then works on the existing data and passes on to the next. The last layer of OSI model is Application layer. 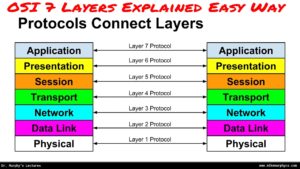 The 7 layers of OSI model are as follows

Q1. The physical layer concerns with

Answer: Optical fiber, it is the fastest cable channel, uses glass for signal transfer. Hene it is more reliable than any other cables. Therefore optical fiber is the answer.

Q3 The data link layer takes the packets from _________ and encapsulates them into frames for transmission.

Q4. Which one of the following task is not done by data link layer?

Answer: packets, network layer works with data with packets as every layer has its own functionalities. hence packeting is network layer’s function. Therefore packets is the answer.

Q6. Which one of the following is not a function of network layer?

Answer: none of the mentioned.

Q7. Transport layer aggregates data from different applications into a single stream before passing it to

Q 8: The packet of information at the application layer is called

Answer: Message, the Application layer is the last layer of OSI model and hence working is based on messages. Therefore message is the answer.

Q 9: This is one of the architecture paradigms

Answer: Both a and b, Both peer to peer and client server is a part of the HTTP protocol. Therefore a and b is the answer.

Q1. The physical layer translates logical communication requests from the ______ into hardware-specific operations.

Q2. The network layer protocol of internet is

Q3. An endpoint of an inter-process communication flow across a computer network is called