What is the Production Function?

Here, ‘Q’ represents the output, whereas ‘L’ and ‘K’ are the inputs, representing labour and capital (such as machinery) respectively. Note that there may be many other factors as well but we have assumed two-factor inputs here. 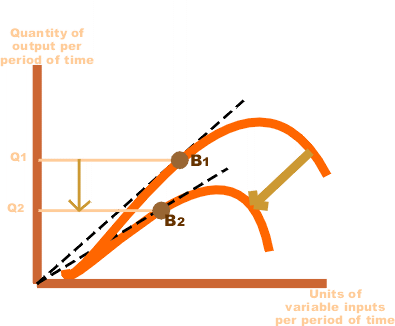 The production function is differently defined in the short run and in the long run. This distinction is extremely relevant in microeconomics. The distinction is based on the nature of factor inputs.

Those inputs that vary directly with the output are called variable factors. These are the factors that can be changed. Variable factors exist in both, the short run and the long run. Examples of variable factors include daily-wage labour, raw materials, etc.

On the other hand, those factors that cannot be varied or changed as the output changes are called fixed factors. These factors are normally characteristic of the short run or short period of time only. Fixed factors do not exist in the long run.

Question: What is meant by returns to a factor?

Answer: Returns to a factor is used to explain the short run production function. It explains what happens to the output when the variable factor changes, keeping the fixed factors constant. Thus, it can be said that ‘returns to a factor’ is a short run phenomenon.

Ans: The correct option is A. Production function is a catalogue of output possibilities