What shapes do Total Product, Marginal product and Average Product take in the short-run? Let us understand the three stages of production and the significance of each stage. Let us take a detailed look.

The total product refers to the total amount (or volume) of output produced with a given amount of input during a period of time. Therefore, a firm wanting to increase its Total Product in the short run will have to increase its variable factors as the fixed factors remain unchanged (that is why they are ‘fixed’ in the short run).

Average product, as the name suggests, refers to the per unit total product of the variable factor (here, labour). Hence, the calculation of Average Product is also very simple.

When we take a look at the figure below, the following can be noted about the shapes of the TP, MP and AP curves. 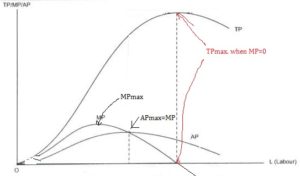 The law of variable proportions explains the peculiar shape of the TP curve. It is based on the following assumptions:

It states that if we increase one variable factor, keeping all other factors constant, the TP curve first increases at an increasing rate (convex shape) and then at a diminishing rate (concave shape) after which it starts to fall. This lends it an S-shape till the point where TP reaches its maximum.

Based on the shapes of the TP, MP and AP curves, we can identify different stages of the production process faced by a firm. 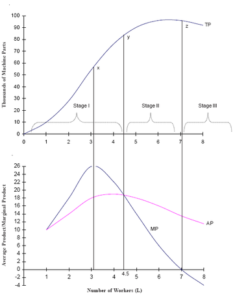 Called the stage of increasing returns to a factor, his stage refers to that phase in the production process where MP is increasing and reaches its maximum point. It is the phase where TP is increasing at an increasing rate. The stage starts from the origin and extends till the point of inflexion – the point on the TP curve after which TP increases at a diminishing rate

Since TP is increasing at an increasing rate in this phase, it is profitable for the firm to continue employing more units of the variable factor to increase its production. Hence, the firm never operates in Stage I.

This stage is called the stage of diminishing returns to a factor. It refers to the phase where TP increases at a diminishing rate and reaches its maximum. In this phase, MP is declining but note that it still remains positive. The stage ends where MP = 0. Since this implies efficient utilization of the fixed factor, a firm always operates in the second stage of production.

This is the final phase, called the stage of negative returns to a factor, where the TP curve starts to decline. MP in this phase becomes negative. This stage is not at all feasible for operation for any firm as the TP starts to decline, which means that production has surpassed the optimum level of specialization.

Question: What might be possible reasons for negative returns to a factor in Stage III of production?

Answer: There can be various reasons for negative returns to a factor: