As a lot of people have started to use poisonous in the place of venomous, the difference between these two words is slowly erasing. Many people just use these terms interchangeably without realizing that it is wrong to do so. Moreover, they also use it as synonyms for each other which is not correct. Consequently, it is important to know that there is a difference between poisonous vs venomous.

Further, the difference is worth knowing because then you will be able to showcase your vocabulary skills. Venom is basically what an animal produces to harm the other. Similarly, they usually inject it through the means of a bite or a sting. It is different than poison because poison gets absorbed or ingested. In other words, the person or animal consumes or inhales it.

On the other hand, we see that poison can be found in all three forms. These forms are solid, liquid or a gas. However, when we talk about venom, it is generally found in the liquid form only. Thus, you see that poisonous vs venomous is quite essential to learn and also use correctly in speech and writing. The similarity between poisonous and venomous is that both of them are adjectives.

Poisonous describes something which can cause death or injury it one ingests or absorbs it. For instance, we must not eat poisonous mushrooms. Alternatively, venomous describes creatures which inject their victims with a toxin. For instance, be careful when handling these fish as they are venomous. Now, let us move on to the differences, uses and examples of these two terms. 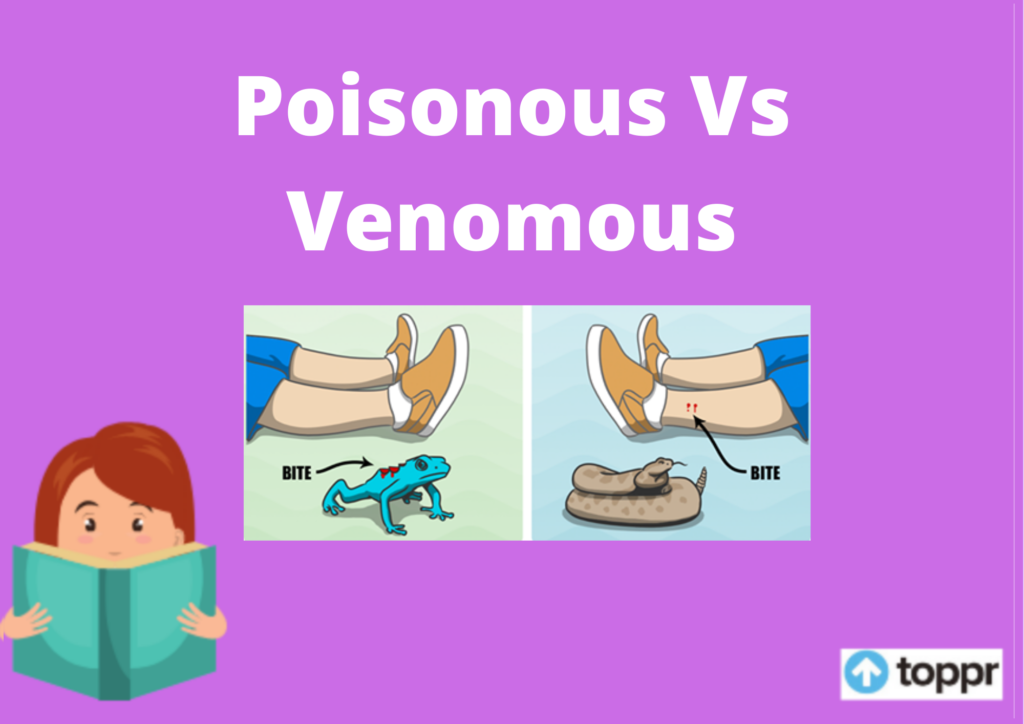 Difference Between Poisonous Vs Venomous

In order to remember the difference between poisonous vs venomous, you can remember this tip. Venomous is only meant to describe organisms which deliver toxins through injection.

Further, organisms which deliver toxins via other methods like simple contact or consuming, are poisonous. Moreover, other substances like chemical cleaners and substances leached by particular plastics can also be termed as poisonous.

When/How to Use Poisonous

It is clear by now that poisonous is an adjective. Thus, we use it for describing any organisms which deliver toxins when we touch or eat it. But, it does not happen through injecting its victim with toxins.

We can use the adjective of poisonous for describing plants, animals and other substances which can cause sickness or death if we inhale, ingest or touch it. Similarly, we can also use it to describe a malicious or toxic environment or situation.

The adverb which forms from poisonous is poisonously and the noun is poisonousness. The origin of these terms dates back to the 1570s from the term poison. Thus, there is a huge difference between these terms. For instance, Poison ivy is poisonous but not venomous.

Moreover, we use it to describe other substances too and not just plants and animals. For instance, bleach is poisonous. Let us take a look at the incorrect and correct use of poisonous vs venomous to know the difference:

Incorrect: Kenny ate a venomous frog which caused him a painful death.

Correct: Kenny ate a poisonous frog which caused him a painful death.

Incorrect: The berries growing along the garden path are venomous.

Correct: The berries growing along the garden path are poisonous.

When/How to Use Venomous

Venomous is also an adjective which we use for describing an organism that injects toxins into its victims through a sting or bites. We can also use venomous to refer to a malicious or toxic environment or situation.

The adverb form of venomous is venomously and the noun form is venomousness. The origin of this term dates back to the 1300s from the Old French Venimos. The major difference between poisonous vs venomous is the method of delivery.

In other words, the poisonous substances are delivered passively while the venomous ones are delivered through a wound inflicted by the attacking animal. When we talk about venomous animals, they are snakes, scorpions, spiders and more.

Let us take a look at the incorrect and correct use of venomous to know the difference:

Incorrect: The poisonous scorpion hid behind the sack of rice when it was raining.

Correct: The venomous scorpion hid behind the sack of rice when it was raining.

Incorrect: Tina panicked when she found a poisonous snake in her garden.

Correct: Tina panicked when she found a venomous snake in her garden.

Examples of Poisonous – Using Poisonous in a Sentence

In order to understand the true meaning of a word, it is important to go through their examples and uses in a sentence. This not only helps in clearing things up but also makes you understand how to use them in a sentence in the correct manner. Let’s take a look at some examples:

Examples of Venomous – Using Venomous in a Sentence

Now, we will take a look at some examples of venomous in a sentence. By going through the use of this word in different sentences, you will be able to use it in the correct manner in the future. Moreover, it will also help you recognize the difference between poisonous vs venomous.