Going Places summary will help you get a better understanding of the story written by A.R. Barton. It revolves around fantasies and daydreams. The story tells us about the teenage period where people are often found dreaming which is far from reality. This period is all about desires and achieving the impossible. In addition, teens usually have a hero they look up to or adore in this age. However, the main background of the story is indeed a reality. It tells us about a girl, Sophie, who belongs to a lower-middle-class family. She dreams of owning the best boutique in the whole town. However, she lacks money and means. Sophie looks up to a young football player, Danny Casey. She dreams about him so much, she believes she has actually met him. Finally, these fantasies are what cause her disappointment. 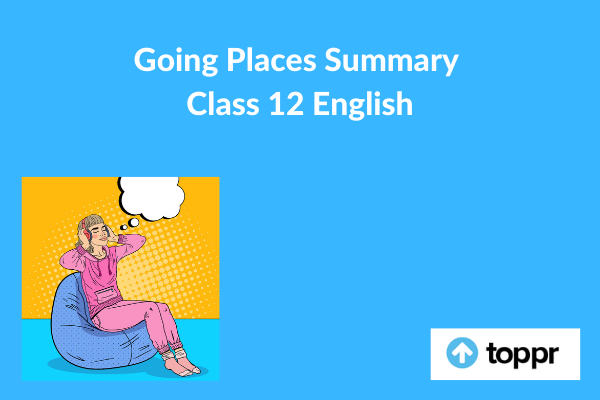 The story begins by telling the reader about a teenage girl, Sophie. Being a normal teenager, she has also got many fantasies and dreams. Sophie belongs to a lower-middle-class family that struggles with finances. However, she dreams to own a boutique one day. Further, she also dreams of becoming an actress of a fashion designer. Similarly, Jansie, her friend, is more practical and level-headed. She knows that they do not have a strong financial background, thus they have to work in a biscuit factory. Jansie does not have any unachievable fantasies. She tries her best to help Sophie stay in touch with reality, but all that goes in vain as Sophie does not listen.

Sophie has got two brothers and lives with her parents in a small house. She does not shy away from expressing her desires and fantasies. However, her parents do not pay much heed to it as they are far more mature than her. They are already facing the harsh realities of life, thus, they do not believe in her fantasies. Sophie’s elder brother is Geoff who is tall, strong, and handsome and remains reserved. She is sort of fascinated by her elder brother. It is so because his silence makes her jealous and wonders what he keeps thinking about.

Further, we learn that Sophie is always fantasizing about a young Irish football player, Danny Casey. She has seen him play in a number of matches and thus starts liking him. As she is always living in her fantasy world, she makes up stories about him. In one made-up story, she tells her elder brother, Geoff, that they met one day in the streets. Being more sensible, Geoff does not believe her story. He feels it is highly unlikely that she just met such a sensation in the streets just like that.

However, as Sophie is so good at immersing herself in fantasy land, she starts describing life-like details. Thus, upon hearing these details, even Geoff wishes that what she was saying turns out to be true. She even goes on to say that they will meet again as Danny has promised her. Thus, Sophie immerses herself so much in the make-believe story that she starts thinking of it as true.  She keeps waiting for Danny to arrives, but alas he does not. Thus, on the way back, she is thinking about how Danny’s not turning up will disappoint Geoff. Nonetheless, she still keeps fantasizing about him and believes they will definitely meet.

To sum up, Going Places summary, we learn about the naïve fantasies of teenagers and how reality may hit us harder as the world in full of compromises and costs a lot of dreams.