Summary of Poets and Pancakes

Poets and Pancakes summary will help you learn about this chapter in a simplified manner. The chapter has been taken from the book ‘My Years with Boss’ by Asokamitran. It is about his time when he worked in Gemini Studios. It was quite a famous film studio back in those days. We learn that Asokamitran’s job is to cut newspaper clippings concerning different topics and maintaining a file of the same. In this story, we learn about a lot of things relating to the film industry, especially the one in India. We get an inside glimpse of the working it and also of the beginning of India post-independence. He first writes his take on the make-up department. Moreover, he makes fun of the looks the actors try and the glaring lights. After that, we learn that ‘pancakes’ is actually the name of a makeup brand used by the Gemini studio. 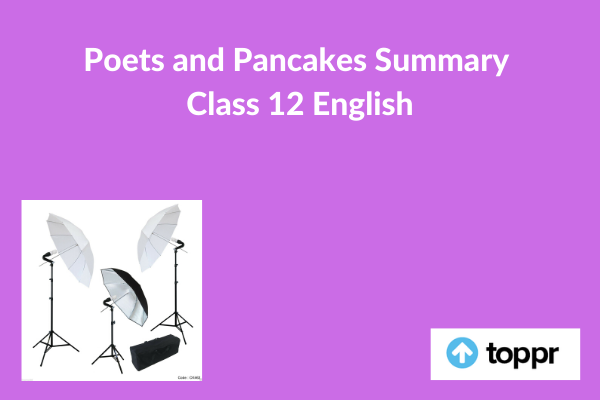 Poets and Pancakes Summary in English

The lesson begins with Asokamitran telling us about Gemini studios. We learn about the very popular make-up brand whose name was ‘Pancakes’. The Gemini studios use this brand excessively and orders truckloads of their products. After that, he goes on to tell the readers about the troubles the actors and actresses face.

Further, we learn that the author is a poet who joins the studio to become an actor, screenwriter, director or lyricist. He has a cubicle to work where he has to collect newspaper cuttings. The office boy always came in with his complaints to the author. The author thinks that Subbu is the one who troubles him. As Subbu is a Brahmin, the author thinks he has an upper hand.

We see that Subbu is a resourceful man with a loyalty that sets him apart. Subbu is the perfect one for films and film-making is impossible without him. Everyone loves Subbu for being friendly and hospitable. Along with many others, Subbu also does poetry. He works for the story department that also has a lawyer. However, people considered him to be the exact opposite of a legal consultant.

Moreover, he is a logical man with a neutral mindset in a group where there are only dreamers. After that, we learn how the Gemini Studios got the opportunity to host the Moral Rearmament Army. They are a group of international performers named Moral Rearmament Army. While they did not have very complex plots or messages, their sets and costumes were almost perfect.

Further, another guest, Stephen Spender, makes a visit to Gemini Studios. However, turns out, he is not that famous and many people have not even heard of him. Moreover, owing to language barriers, many could not understand him. Thus, his visit remained a mystery until after many years the author saw Stephen’s name in a book and recognized him from his visit to the studio.

Conclusion of Poets and Pancakes

To sum up, Poets and Pancakes summary, we learn about the film industry in detail and the inside functioning as well as when Independent India was in its infancy.