Table of content
1 Summary of Indigo
1.1 Indigo Summary in English
1.1.1 Conclusion of Indigo

Indigo summary is going to assist students in learning about the chapter in a summarized version. Indigo is about how Mahatma Gandhi struggled for the underprivileged peasants of Champaran. They were the sharecroppers with the British planters. The peasants use to live a wretched life and were under an agreement to grow Indigo. As Bihar has the landlord system back then, it worsened their condition. Thus, Gandhi decided to fight against injustice. He waged a war which lasted for a year to tackle the discrimination and got justice for the peasants. After that, it helped the peasants become courageous and aware of their fundamental rights. Moreover, Gandhiji did not just work to tackle political or economic issues, but he also took up social issues. He worked to provide them with education, health, hygiene and taught them self-confidence. 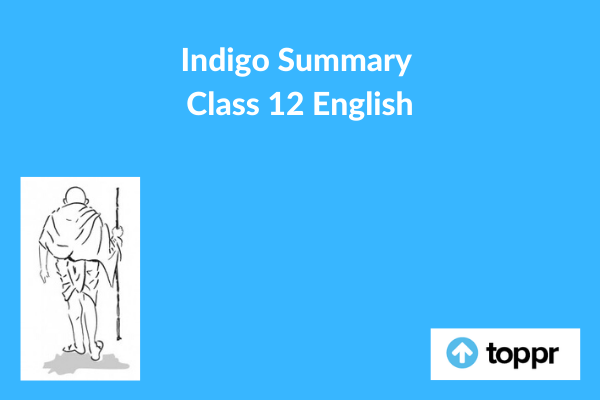 This story is set in 1916 where Gandhi steps up to help a bunch of poor peasants from Champaran. It gives an account of how he struggled to bring them justice and equality. Thus, it begins with most of the arable land of Champaran that divides into a large estate. The owners of the estate are Englishmen and the workers are Indian tenants. We learn that the chief commercial crop on this land is Indigo. Moreover, we also see that the landlords compel all the tenants to plant 15% of their Indigo and submit the whole harvest in the form of rent. The tenants are under a long-term agreement to do so.

However, Germany starts developing synthetic Indigo. Thus, the British do not require the Indigo crop any more. Thus, in order to release the poor peasant from their agreement of 15%, they start demanding compensation. While some of the uneducated peasants agreed on this, the other did not agree. Thus, we notice that one of the sharecroppers, Raj Kumar Shukla arranges for a meeting with Gandhi.

He meets him for the same issues and insists Gandhi to visit the place to end the longstanding injustice. Gandhi agrees and boards a train to Patna in Bihar. After that, Raj Kumar Shukla helps Gandhi visit the house of Rajendra Prasad, a lawyer. As Gandhi dresses simply, the servants thought of him to be a poor peasant. Thus, Gandhi planned before trying to get the peasants any justice. It is because the British government are punishing anyone who is keeping national leaders or protestors.

Thus, when Gandhi arrived in the place, the news of his arrival and mission spread across the town like wildfire. This resulted in a lot of lawyers and peasant groups pouring in large numbers in his support. Consequently, the lawyers did accept that the charges are quite high and too unreasonable for a poor peasant.

However, Gandhi was criticizing them for collecting huge fees from the sharecroppers. He was emphasizing on counselling as this will provide the peasants with confidence to fight their fear. Thus, he manages to get justice after a yearlong fight for the peasants. He has also arranged for the education, health, and hygiene for the families of the poor peasants. Finally, he teaches them a lesson of self-sufficiency and self-confidence.

To sum up, Indigo summary, we learn how Gandhiji did not merely help in freeing India, but was always working for the betterment of his countrymen from the very start.