Summary of A Roadside Stand Summary

A Roadside Stand summary deals with the lives of poor deprived people. Furthermore, the poet contrasts the struggling lives of the countryside people with the insensitive life of the city dwellers. The city dwellers don’t even bother to ponder on the harsh condition of the roadside stand people. The city dwellers don’t think about the struggles these roadside people have to go through in order to sell their goodies. These poor people have nothing to do except wait for the passing cars to stop and purchase their products. If at all a car stops by, it is to know about directions or to make complain about something. The poet deeply sympathises with these impoverished people and feels compassion for them. This sympathy is evident in the portrayal of the roadside sheds in a poignant manner. 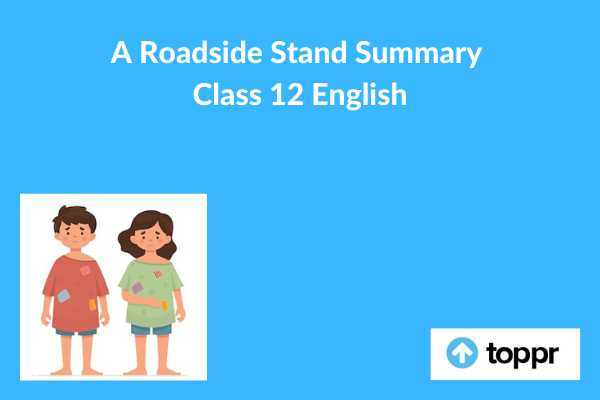 A Roadside Stand Summary in English

There has been an extension of the shed in front by the occupants of the little old house. Furthermore, this extension is around the edge of the road where the passage of traffic takes place. It seems like the shack-owners want to implore the passers-by to purchase something from the shack. These deprived people have a huge desire for the currency.

Unfortunately, the traffic goes past ignoring the shack. If by chance the traffic does stop, it would come with a feeling of disappointment.  They are very disturbed to see the poor unattractive signboards. There is an offer of wild berries shack for sale in a wooden quart (a quarter of a gallon). This place offers a peaceful natural stay for those who can afford it. The poet becomes angry at this attitude of the ‘polished traffic’ and asks them to move ahead.

The poet shows more concern for the sadness of the shed-owners than he does for the landscape blemish. He believes that these people have a longing to handle some city money. This money can reduce their suffering as one can see in movies. The political party that enjoys power is the one that deprives them of a happy life.

The poet makes mention of the news which points out the relocation of the poor villagers to the vicinity of shops and theatres. There were big promises to ensure good care for them. However, the government authorities became negligent of these promises. Furthermore, the poet is angry at this behavior and calls them “greedy good-doers”. He calls them “beasts of prey” who indulge in the exploitation of the poor villagers.

The villagers pay a heavy price as they had to lose their land. The civic authorities are successful in fooling these naïve villagers.  They promise them a better life and a good sleep. However, these civic authorities are the ones who sleep peacefully while making the lives of villagers miserable. Work during the day and sleep at night was the norm in ancient times. However, there has been a reversal of this norm as the villagers are not able to sleep at night.

The poet expresses his distress while explaining the endless wait of shed owners for buyers. There is an ambiance of sadness all over the place.  Sometimes a car stops but that is to enquire about the farmer’s price. Furthermore, others who stop just want to make use of the backyard. One of the cars stops for a gallon of gas. Moreover, this demonstrates the sense of alienation between urban and rural life.

The poet regrets that money is not abundant in the country-side. Furthermore, money can raise spirits while a lack of it dampens it. The villagers have a tendency to express their grievance about a life which has a lack of money. Moreover, the poet becomes very emotional and contemplates their pain. He certainly wants to change their lives in one go but understands that this will be a futile act.

Conclusion of A Roadside Stand Summary

A Roadside Stand summary shows us the great contrast between the comfortable life of city dwellers and the harshness faced by the impoverished rural people.